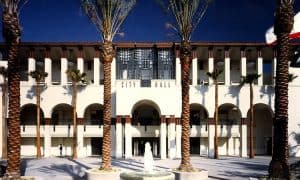 The regular meeting of the Culver City Parks and Recreation Commission was anything but regular on Tuesday, May 7. A panel discussion and community conversation facilitated by CCHS English teacher Dr. Carlos Valverde brought a panel of students from his ‘Intercultural Literature’ class to the city hall chambers to talk about diversity and multiculturalism both on campus and in town.

PRCS Commissioner Scott Garland offered ,”This evening came about because, as adults and civic leaders in the community, we needed to address this issue and this seemed to be a place to start.”

Commissioner William Rickards noted that ‘If we were to imagine a group of 100 people who represent Culver City,  47 would be white,  23 Latino, 9 African American and 4 Biracial or multiracial. So knowing what our make up is and asking how can we most benefit from that, that is where we begin.”

Dr. Valverde had his students introduce themselves; Taylor Perkins, Maria Sernas, Jimmel Ebanks, Arely Hernandez, Suhail Abbas, Quinn Guy,  Joshua Bhumsuko and Fatima Malik filled the tables and sat with microphones.  Asked to describe their ages and cultural backgrounds, they filled the spectrum, although most were Seniors and only one was a Junior at the school.

Considering when they first came to recognize their cultural identification, they all cited an experience in grade school, some feeling quite neutral, some feeling as if different was not equal.  Josh Bhumsuko told a story of bringing noodles for lunch when everyone else was eating ‘Lunchables’ so he tried the packaged food and discovered he “did not like it at all.  Idid not get why this was supposed to be good food.”

The students offered observations that while the campus was diverse, the groups on campus often were not. Arely spoke about how being in AVPA meant she could not be a part of Latinos Unidas – the meetings were scheduled at the same time –  and that AVPA itself was a very Caucasian crowd.

Taylor noted “The fact that we have an intercultural literature class says a lot, but maybe it could be a requirement and not just an elective option?”

Jamal noted that diversity was also ‘thinned out’ in the AP classes. “I’ve take several AP classes, and I’m always the only African American in the room.”

The lack of African American teachers was also noted, with the students saying it would show consistency with the ethics the school taught to bring more into practice.

“When we put up our centennial posters, it made me cry tears of joy to see a girl with a headscarf,” said Fatima, the only junior on the panel.

The students were experienced and understanding of the economic factors reflected both in the diversity and the lack of it.  Two of them offered that their families had to relocate – to Santa Monica and to Inglewood, respectively, for economic reasons. The rising rents were a direct push to lower income families, unable to stay in Culver City.

The lack of space for teens to interact outside of school was also a factor, with the loss of the skating rink and the lack of a student discount at ARClight Cinemas making it tough for kids to stay on budget and stay in town.

Taylor noted that “We have multiculturalism, but not a lot of interculturalism. We need more places to get together and get to know each other better.”

The PRCS took a first step in getting the community in to listen. What might come as the next step remains to be seen.