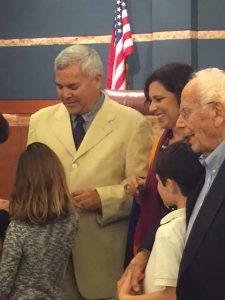 Every year towards the end of April, there is a City Council meeting with just one agenda item – rotating the mayor. After a hectic and brilliant year, it was Jim Clarke’s moment to step down, and hand the ceremonial office over to the Vice Mayor, Jeff Cooper.

With Council member Gōran Eriksson attending the meeting by phone from Sweden, all measures had to be passed by a voice vote. It could have been surprising how much warmth and good humor could be carried by the word ‘yes’ over a few thousand miles of electronic connection, but no one who has watched the council over the past year could be very surprised. Clarke’s enthusiastic bravado for the Centennial spilled all over the city, and the council members echoed each other’s compliments for his time in the office.

With a chamber full of friends and well wishers, Clarke offered a few brief comments about his term. “The thing about being mayor is that, even if you are just running out to the store, you need to have your hair combed, and nice shirt on. You can never ever let anyone say ‘I just saw the mayor and he looks like a bum.’ ”

Clarke offered that it might be something to consider, changing the way we elect a mayor – “The position could be one confirmed by an election, and held to a four or eight year term.” Clearly, the year went by too quickly for the mayor.

With his constant appearances at events, Clarke was nicknamed “Mr. Everywhere” by his colleagues. His unlimited enthusiasm for the Centennial successfully started the bandwagon rolling a full year early, and most of the events – the parade, the gala, the Screenland 5K Run, all had Clarke as the Master of Ceremonies and the proudest voice in the crowd.
This year’s rotation was without challenge, and Jeff Cooper, Clarke’s Vice Mayor, was promoted into the mayor’s chair, followed 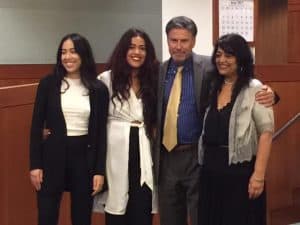 by Thomas Small being voted into the Vice Mayor post.

The pinning ceremony saw the Cooper family – spouse Rafia and daughters Rhiannon and Allison – with the new mayor. The Vice Mayor Thomas Small had his partner Joanna Brody, her father and both of his children on hand to add his new status to the lapel of his suit.

The next regular meeting of the council will be May 8, 2017.