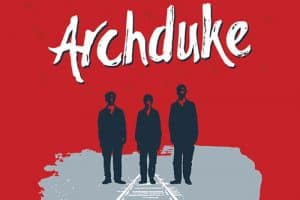 Center Theatre Group will host multiple community events inspired by “Archduke” including two Community Conversations on May 13 and 24; three post-show Stage Talks on May 2, 21 and 23; post-show Audience Talks after every evening performance beginning May 11; a special “Taper and Tonic” gin tasting event on May 3; and two “Archduke”-themed trivia nights on April 26 and May 1.
Written by Rajiv Joseph and directed by Giovanna Sardelli, the world premiere of “Archduke” begins previews April 25, opens May 7 and continues through June 4, 2017, at the Mark Taper Forum.
The first “Archduke” Community Conversation will kick off Saturday, May 13 from 5:30 to 7:30 p.m. with The Mind of a Young Radical. In this pre-show conversation, panelists will discuss the alienation, loneliness and anger that young people often feel. The three men who set World War I in motion by joining a Serbian nationalists group and killing Archduke Franz Ferdinand were under the age of 20. A century later, young men and women of the same age continue to find themselves drawn to groups and movements – many of them radical and violent – ranging from terrorist cells to gangs. Center Theatre Group will bring together scholars and cultural critics to discuss the psychology of young radicals throughout history and today. This event will take place at The Music Center Annex building, 601 W. Temple Street, Los Angeles, CA 90012, in Rehearsal Room A. Panelists to be announced.

The second “Archduke” Community Conversation will be Wednesday, May 24 from 6 to 7:30 p.m. with What Makes a Man? In this pre-show conversation, panelists will discuss how masculinity has changed in the past hundred years and what we think it means to be a man today, in a time when gender might be more fluid than ever before. In Rajiv Joseph’s “Archduke,” assassin Gavrilo Princip and his co-conspirators find themselves drawn to violence on the eve of World War I in part by the idea that it will transform them from boys into men. Center Theatre Group will bring together social scientists and thinkers to discuss how we think and talk about masculinity, and how our ideas and conversations change the world we live in. This event will take place at The Music Center Annex building, 601 W. Temple Street, Los Angeles, CA 90012, in Rehearsal Room C. Panelists to be announced.
Center Theatre Group will host three post-show Stage Talks with select members of the “Archduke” creative team and Center Theatre Group’s artistic staff following the evening performances on May 2, 21 and 23 at the Mark Taper Forum. Audience Talks led by Center Theatre Group Teaching Artists are also planned to take place after every evening performance of “Archduke” beginning May 11. The Stage Talks and Audience Talks allow audience members the opportunity to discuss how the art on stage and the experience they have shared in has resonated with them and their world both personally and as a community.
Center Theatre Group will also host a Taper and Tonic event after the May 3 performance of “Archduke.” Sponsored by LA Weekly, Sipsmith spirit will offer audience members a complimentary gin tasting in the lower lobby of the Mark Taper Forum following the 8 p.m. performance of “Archduke.” The tasting will be available exclusively to audience members attending the show that evening.
Center Theatre Group is partnering with Geeks Who Drink for two free nights of “Archduke” Trivia Nights. The first “Archduke”-themed trivia night will take place at The Blind Donkey in Pasadena on Wednesday, April 26 at 7:30 p.m. The Blind Donkey is located at 53 E. Union St, Pasadena, CA 91103. The second “Archduke”-themed trivia night will take place at Hamburger Mary’s in West Hollywood on Monday, May 1 at 7:30 p.m. Hamburger Mary’s is located at 8288 Santa Monica Blvd., West Hollywood, CA 90046.