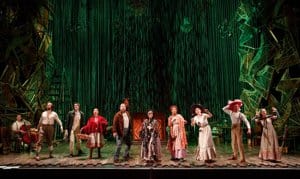 On Friday, April 28, Center Theatre Group will launch the newly created free concert event “Broadway at Grand Park” from 12:30 to 1:30 p.m. with cast members from the Ahmanson Theatre’s “Into the Woods” and “Jersey Boys” performing some of the biggest hits from these popular shows. The concert is free and open to the public.

Mark Ballas as Franki Valli will lead the Jersey Boys for the Grand Park concert with Matthew Dailey, Keith Hines and Cory Jeacoma as Tommy DeVito, Nick Massi and Bob Gaudio, respectively. The Jersey Boys will perform the hits “Sherry,” “Walk Like a Man,” “Big Girls Don’t Cry,” “Oh, What A Night,” “Who Loves You” and “Can’t Take My Eyes Off You.” Cast members from “Into the Woods” will perform a selection of favorites from the hit Sondheim musical.
Ballas will reprise his acclaimed Broadway performance as Frankie Valli in the Ahmanson engagement of “Jersey Boys.” Ballas, known for his Emmy nominated work on “Dancing with the Stars,” made his Broadway debut in the role last fall. “Jersey Boys,” plays at the Ahmanson May 16 through June 24, 2017.

The acclaimed Fiasco Theater Company’s “Into the Woods” is currently playing at Center Theatre Group’s Ahmanson Theatre through May 14. The Tony Award-winning musical with music and lyrics by Stephen Sondheim and book by James Lapine, is directed by Noah Brody and Ben Steinfeld.

“Into the Woods” includes memorable songs like “Children Will Listen” and “No One Is Alone.” Mind the wolf, heed the witch and honor the giant in the sky in this extraordinary musical about the power of wishes and what really happens after they come true. The award-winning musical has been mounted with boundless imagination: a witty and wild theatrical reinvention of a beloved modern classic.