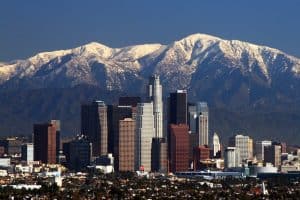 I just realized that I am attracted to buildings. Today alone, I went to a building in the MacArthur Park area to make a presentation, and arrived to find that it had been built in 1928. I am still attempting to research its history, but for the moment, I was moved by its old-world beauty and charm, and I find myself wanting to know what famous or infamous businesses had existed there, and who (or what entities) may have owned it over the years. The fact that it fronts out onto Los Angeles’ main thoroughfare Wilshire Blvd, and is a block from MacArthur Park adds to its allure.

On the drive home, I was enjoying the drive west into the sunset. It was a particularly beautiful day and time, with the buildings of Los Angeles silhouetted against the sky, and of course, when you raise your eyes up, as you descend from downtown toward the west, your vision is dotted by the heads of our palms trees. Turning left down Fairfax as more of a habit than what a GPS would likely recommend, but I noticed a building for the first time as I slowed to the stoplight on Pico. It looked like a Korean church, but had a Jewish star covered by lattice. As I extended my neck to look higher, I saw a cross mounted on the top of the building. I snapped a photo. This edifice was easier to research on Google; it apparently is the Korean Western Presbyterian Church. What I want to know is when, and under what circumstances, the Jewish congregation that must have inhabited it at some point, sold it. When it comes to real estate, especially in a relatively young city like Los Angeles, it should not be hard to find out these answers. The question is, why do I need such details floating around in my mind? Seriously, I do not have so much time on my hands!

Upon reflection, I have come to the realization that this trolling of buildings is somewhat of a hobby for me. It certainly is the motivation for a lot of the traveling that I do. Having just returned from a trip to Cuba, as I wrote in last week’s Ruth’s Truths, I spent the better part of that trip looking at and/or being inside some well-preserved buildings that went out of the way to tout their histories. There were, literally, galleries set up inside some of the establishments with mid-century black and white photos of famous people who had been there. Pre-research of a place like that is one way to go, but another thing I am fond of doing is extending my trip high by buying books about a place. I am currently, and voraciously, reading a book about Havana’s pre-revolution mob history. I rhumba’d my way into our one free-standing and beloved Barnes and Noble in Marina del Rey and bought Havana Nocturne by T. J. English, and I am loving the accounts of events that occurred in the places I just saw. In Havana, then and now, the hotels themselves are destinations; Trip Advisor must-sees, somewhat like Las Vegas.

Speaking of Las Vegas, Havana in the day was a pre-cursor to Vegas itself, developing as a resort and gaming destination around the same time, but, for example, the Tropicana Hotel I grew up seeing in Las Vegas was actually to have been a “Cuban-themed” resort, based on the famous Tropicana Club in Cuba. In reading the book and researching the history of the Vegas hotel, I am finding out now that the Tropicana Club still exists in Havana, and I missed it last trip owing to my proclivity to read about a place after, instead of before, seeing it.

Further on Vegas, now understanding the connections between Havana and Las Vegas, I spent a half hour or so looking at photos of, and reading blurbs on Wikipedia about, since destroyed (imploded is the word, and process, they employed) Las Vegas hotels. I grew up in a Vegas-loving family, and my childhood vacations were spent having Sunday brunch before driving back to L.A. at the Hacienda Hotel (Mandalay Bay is now on top of the site). My grandparents would take me to dinner at The Dunes (Bellagio there now) hotel buffet, and when we stayed there I looked out onto The Strip and the huge Plexiglas sultan standing on the porte cochere through the cement design over the windows. We stayed most frequently at the Sahara Hotel, and I jumped off a diving board once in my life: into their Olympic-sized pool. I went back to stay there again after my dad passed away in 2009, seeking to commune with my parents’ spirits, who live in Vegas for sure, and the rooms in the towers not only felt like the 60’s, but seemed like they’d not been renovated since. Most of the original footprint of the place was still the same, but major changes were already underway, including the fact that my beautiful pool had been moved. Very few original hotels are left standing now on The Las Vegas Strip, and those that are have been renovated beyond recognition. One place that still remains, as it was, founded in 1958 (just like me!) is The Golden Steer restaurant, on Sahara Blvd. I would not go to Las Vegas without eating at this place that my parents discovered on their first trip to Vegas, where (and when) they used to tell me, I was conceived.

My final building-loving “trip” yesterday was to so-called “Little Osaka.” We used to just call it “Sawtelle” or, “the Japanese neighborhood.” Among other lost buildings, the most gaping, devastating loss there has been that of the Westside YMCA. This was a conveniently located, well-equipped structure that included a pool, a full basketball court, a running track, locker rooms, and a classroom and/or office space, etc. I grew up there, my kids grew up there, and every time I have to pass the site, I have to avert my eyes, saddened to see the memories in my life that took place there pass before my eyes, but the venue that housed them gone.