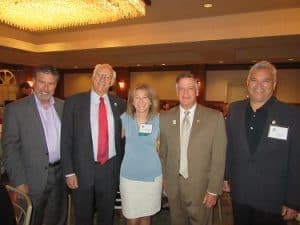 On April 21, The Westside Urban Forum’s signature event, the annual Westside Mayors’ Panel, welcomed Westside mayors Jim B. Clarke, City of Culver City; Mayor Lou La Monte, City of Malibu; Mayor Ted Winterer, City of Santa Monica; and Mayor Lauren Meister, City of West Hollywood for a candid discussion of each mayor’s priorities, topics of importance to their cities and common issues that they face. Amid excitement over the region’s economic vibrancy and new developments and challenges like housing, the Westside stands at a crucial juncture.

The Mayors shared their thoughts on the economic outlook for each of their cities, the impacts of the federal government on local cities, region-wide housing challenges, and ways cities are planning for current and future transportation changes (Expo, Culver City’s Transit Oriented Development Project, and autonomous vehicles), among many other topics of interest across the Westside. Vice Mayor Jeffrey Cooper and Council Member Thomas Small participated in the event and are pictured below with Mayor Meister and Mayor La Monte.