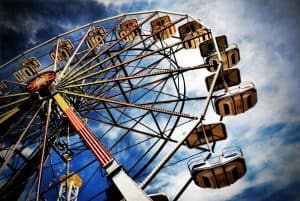 As the vote was called at the City Council meeting on Monday, a sickening realization came over me; this was the beginning of an abusive relationship.

As a woman who has survived a number of abusive relationships, I have been on this Ferris Wheel, and it’s ugly. You can go up, and you can come down, but there are very limited opportunities to get off.

The vote was three to two, and the decision was made allow the oil company’s request. Because the oil company decide to begin their relationship with our city by being abusive.

This is what abusers do. They walk in the door asking for your pity and violating your boundaries. And because, it seems like the decent thing to do – you give them a little sympathy and you allow for this request. It seems very reasonable. It’s a small thing. You are made to feel as if it would somehow be unkind not to.

Sentinel Peak bought more than a dozen employees to the meeting to plead for their jobs, with talking points that emphasized their need to feed their families. Please do what our company asks, or children will go hungry.

This is an outright lie. They just want to put those years of Environmental Impact Report preparation on ice, and let them enjoy their oil field without legal regulations.

Gaslighting; sadly, many people are now familiar with this term after the last federal election, but knowledge is power.  Those of us who have survived abusive relationships know where this goes. Whatever you say will be contradicted, every detail, down to splitting hairs. Nothing, not even ‘please pass the salt’ will go without being challenged. Day will be called night, the abuser will insist that it is night and if you have the guts to point out that the sun is shining in the sky, well, you are just asking for an argument.

Culver City, see your legal fees climbing now. Everything you say will be challenged.

So, even while the council acknowledged that there were no jobs at stake – and if there had been, they were not at the mercy of the city council but under the auspices of Sentinel Peak – it looked as if they were voting in sympathy with these rehearsed and stage managed employees. Who I hope at least got their hourly wage to turn up at this meeting like characters out of Dickens, moistening their eyes and pronouncing their humility in quavering voices.

This is the creation of a false equivalence. If this, then that – that’s logic. But if this, then what? That’s insanity. There is no logical relationship between these jobs and the release of the EIR. None.

While Sentinel Peak Resources are making a big grandstanding move to tell you that they –  the fourth largest oil producer in the state – that they just don’t have the wherewithal to take care of things unless you feel sorry for them and give them what they ask, please take a moment to doubt that.

Who do you think has more resources, the fourth largest oil producer in the state, or the five square miles and 40,000 residents of Culver City?

I’m fascinated that the day after this meeting, I got a letter to the editor, signed by two of the council members who voted yes, and a phone call from the third, asking for a moment to explain his vote.

Gentlemen, I can certainly understand that you have never been the victim in an abusive relationship. Most men do not have personal experience with being constantly pushed, emotionally abused, financially injured, socially humiliated and gaslighted. Abuse is about control. Abusers do not care how they get control over you, they just need control. When they cannot control your actions, they go public with lies about you, trying to control how other people see you.

This could injure your brand.

Beginning a relationship with Culver City with this manipulation, asking for pity, violating boundaries – this is a textbook case.

Don’t feel at ashamed. One of the smartest women I know – a PhD in Languages with a position at one of the most outstanding universities in the country – had a harrowing escape from an abusive relationship. My own stories could fill a book. It isn’t that you are dumb. It’s human nature to want to help someone who is asking for help. It’s civilized to honor a request that seems reasonable. But when there’s no end to these requests, and they all involve giving up something you really were not willing to give up – red flag. When relationship is contingent on submission – red flag. When you don’t agree and are then contradicted, doubted and argued into the ground – red flag.

In the yoga community, we have a phrase; ‘the way you do anything is the way you do everything.’ I found it very interesting that the two ‘no’ votes came from council members who are locally known for having very solid, long-term personal partners. Good relationships do not include or tolerate abuse. Good business relationships follow the same line.

I don’t mean to imply that those who voted yes are in any way involved in abusive relationships. They may simply never have been in on a game of heads I win,  tails you lose.

So, you have 90 days for this turn around the Ferris Wheel. When you get back to the ground, do yourself a big favor and get off this ride. Once you start co-operating with abusers, the wheel is taking you up again.

Doing business with an entity whose name is a synonym for ‘lookout’  – You’d best look out.