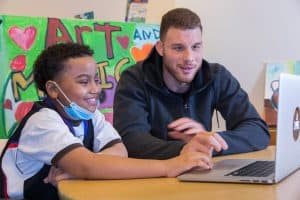 When the Los Angeles Clippers took the floor against the Washington Wizards on March 29, star power forward Blake Griffin was wearing a special pair of kicks.

Justice, a graduate of El Rincon Elementary School, currently attends Culver City Middle School and the CCUSD iAcademy to accommodate his learning and home/hospital needs. The sixth-grader was born with a common form of cancer that affects almost one out of every three children or teens diagnosed with cancer. Currently a patient at Children’s Hospital Los Angeles, Justice is battling ALL, or acute lymphoblastic leukemia, a type of leukemia in which the bone marrow makes too many immature lymphocytes.

“This little one didn’t deserve this. I would rather take it on than him,” said Justice’s father, Lyfe Griffth, who added that his son has had to face a difficult battle that sees him in and out of the hospital on a regular basis.

To make Justice’s road a little less bumpy, Children’s Hospital Los Angeles included him in the hospital’s Make March Matter™ drive, which partners with companies to create unique experiences for children battling cancer and help ensure that critical, lifesaving care is available to every child treated at the hospital.

The Clippers Foundation’s goal is to help raise $1 million for the hospital; and Clippers players including J.J. Redick, Luc Mbah a Moute, Austin Rivers and, of course, Griffin, have spent time visiting with patients and working to raise funds for the effort.

“In this day and age, it is almost impossible to not know someone who has been touched by cancer,” the 2011 NBA Slam Duck Contest champion said. “Making sure the person who is going through this situation has things to look forward to, to be happy about, to be positive about … hopefully, this will help.”

Griffin recently spent the day visiting Justice and his family at Children’s Hospital Los Angeles where they whipped out a laptop and spent time working together to create a unique shoe design that includes an infrared upper with a black speckled mid-sole and the letters J-U-S-T and the number 5 on the back of the shoe.

“My dad taught me that five had power, so if you look at it, it says ‘Just Power,’” Justice said, beaming as he looked at the final design.

CCUSD Superintendent Josh Arnold said Justice’s bravery and resolve in fighting ALL is an inspiration for everyone in the District.

“To see a student like Justice, who faces daily challenges we can only imagine, remain strong, creative and brave is the epitome of #CulverPride,” Arnold said. “Everyone in the CCUSD family is rooting for Justice, and we encourage everyone in the community to check out the Make March Matter™ fundraising program on-line to help CHLA make a difference for children like Justice.”

The Justice-designed, game-worn shoes will be auctioned off at www.clippers.com/auction with all proceeds donated to the Make March Matter™ fundraising program.