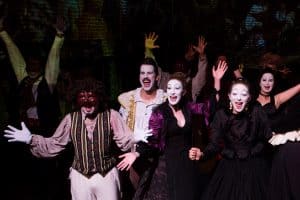 At the very beginning, it seems there might be a lecture. Two men take the stage in academic robes, although both are painted in whiteface like clowns, and obscured by masks like ancient actors. As they introduce the concept of Commedia dell’Arte, their words tell us that they too are characters, speaking an overblown and embellished language of self-importance. Dr. Preamble and Dr. Afterword really would prefer a simple slide show, but – as the rest of the troupe takes the stage, the gates of the surreal open to an interesting corridor of history.

The Actors Gang likes to entertain you in ways that make you think.  The national premiere of Harlequino: On to Freedom on March 25 was even sly enough to make fun of itself while carefully connecting the history of theater, and how the way we tell stories is a story itself.

Commedia dell’Arte is a language that the Actors Gang uses to great effect, and the stock characters often reflect the 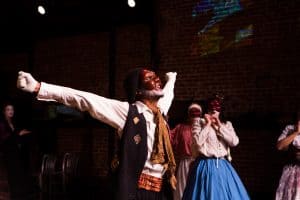 archetypes we use as shorthand. The rich man, the beautiful widow, the innocent young lovers, are all characters we recognize easily from Shakespeare to cinema. But Harlequino is harder. Referenced as a ‘servant,’ the term is corrected to ‘slave’ and the company argues and wonders how that changes anything – or does it change everything?

The plot turns on desire – can the rich man get the widow in bed?  Will the innocent daughter be forced to wed against her wishes? But the play takes the long road, through the history of the commedia and the use of storytelling to evade the censorship of forbidden topics. Adding music and dance to all manner silliness keeps the wheels turning, but it isn’t until we arrive at the end that we are allowed to see how serious things are.

Theater is the space that shows us how the artifice of ‘make believe’ reflects our reality in all it’s hard and brilliant facets. Harlequino: On to Freedom is a clean cut jewel.

Harlequino: On to Freedom

For tickets go to theactorsgang.com or click on the ad