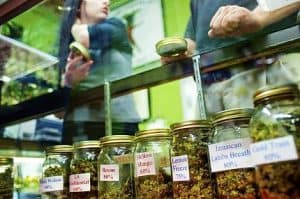 On February 27th, the City Council of the City of Culver City unanimously approved the formation of a Marijuana Task Force to explore the complexities of regulating marijuana within the City. The City Council also appointed Vice Mayor Jeffrey Cooper and Council member Meghan Sahli-Wells to serve on the Task Force along with a Planning Commissioner, a Finance Advisory Committee Member, and City staff.

California Proposition 64, the California Marijuana Legalization Initiative (also known as the Adult Use of Marijuana Act) was approved by voters in November 2016, making it legal for individuals to use and grow marijuana for personal use. The Marijuana Task Force will discuss issues such as land use regulations, the kinds of marijuana-related businesses the City should allow to operate, and non-commercial cultivation of marijuana. The task force will then advise Council on policy direction options in preparation for the possible sale and taxation of recreational marijuana going into effect on January 1, 2018.

“Culver City wants to do its due diligence when it comes to the subject of marijuana. Cities like Denver, who have already gone through this process, have put a lot of thought into their regulations,” said Culver City Mayor Jim B. Clarke. “I especially want to thank the community members who have stepped forward to make their opinions known. I’m very confident that, with the guidance of the Task Force and the recommendations of City staff, the City Council will make decisions that benefit our community while keeping our City safe.”

The community is welcome to provide the Marijuana Task Force with input on marijuana regulations during Task Force meetings: each meeting will be open to the public and include time for public comment. To stay informed via email about the City’s policies on marijuana, as well as meeting times and locations of the Task Force, please go to the notifcations page on the City’s website and select the “Marijuana” Topic when signing up.