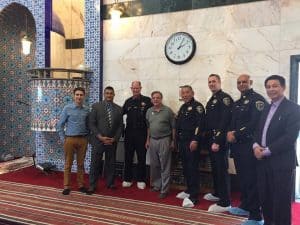 Tuesday, March 21st marked a Day of Immigration Action by the United States Conference of Mayors. Events scheduled to demonstrate support for immigrants in communities across the country were focused to reiterate the mayors’ call for comprehensive immigration reform.

This past week, Culver City Police Chief Scott Bixby led a community discussion on immigrant rights and police protection of those rights. Culver City Mayor Jim B. Clarke and Chief Bixby, addressed the congregation of the King Fahad Mosque (pictured left) in Culver City to reiterate the city’s policy of protecting immigrant rights and threats against ethnic and religious minorities. Because of increasing national threats, Chief Bixby recently published a letter (see Opinions section, http://culvercitycrossroads.com/2017/03/22/dear-editor-ccpd-addresses-community-concerns-with-immigration-policy/) outlining the Department’s policy on protecting the rights of everyone – regardless of immigration status. Because of his efforts, Chief Bixby was presented with a certificate of recognition for his exemplary community partnership with the King Fahad Mosque.

“We are proud that Culver City is a city of diversity. In fact, the City Council has adopted a goal to become recognized as a City of Kindness. And, being a welcoming City is an important aspect of that effort. Additionally, last year, the City Council passed a Resolution condemning violence and hate speech. Culver City will continue to be a welcoming place for all of our residents, businesses, and visitors,” said Mayor Clarke. Additionally, the Culver City Unified School District has also passed the Resolution – “Success For All Means Safety For All: Culver City Unified School District Campuses as Safe Zones and Resource Centers for Students and Families.”

Tuesday, March 21,  Mayor Clarke joined U.S. Conference of Mayors leaders Los Angeles Mayor Eric Garcetti, Providence Mayor Jorge Elorza, Anaheim Mayor Tom Tait and Seattle Mayor Ed Murray in a bipartisan press conference call with reporters to kick off the Day of Action and to show their support on social media with the hashtag #MayorsStand4All. On the press conference call, mayors also emphasized the vital contributions that immigrants make to their cities and the nation. They will urge the Administration and Congress to focus on common sense reforms that will fix the nation’s broken immigration system in an efficient, effective and compassionate way.