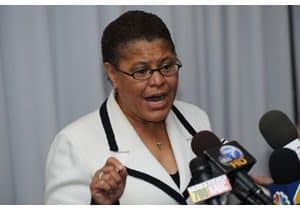 “Is the President compromised?”

That was the main question I had earlier this month during a hearing the House Foreign Affairs Committee held on Russia’s successful intervention in our election. And I think answering that question is more important than ever after yesterday’s confirmation from FBI Director James Comey that his agency is investigating whether Russia colluded with the Trump campaign, and his dismissal of Trump’s claim that he was wiretapped during the election.

That accusation and the possibility of collusion are right out of Russia’s playbook.

During the Foreign Affairs Committee hearing, we heard from four experts who laid out Russia’s goals to create chaos in our nation and undermine confidence in our institutions.

What is most disturbing is that the chaos and subversion didn’t end when the election results came in. It continues to this very day, thanks in large part to Donald Trump’s claims that millions of people voted illegally and his paranoid Tweets that call into question the credibility of the institutions that could refute his claims. Which is why I asked the question at the hearing — do the Russians have information about the President that compromises him?

The hearing was long — about four hours — but I encourage you to watch some of it because the topic is so vital to our Democracy. This is about our country’s future elections, similar threats that our NATO allies face, and our standing in the world.

And it’s why I’ve cosponsored H.R. 356, the Protecting Our Democracy Act. This bill calls for an independent, bipartisan commission to investigate Russian interference in the 2016 election. The 12-member commission would interview witnesses, obtain documents, issue subpoenas, receive public testimony, and would then issue a final report within 18 months that includes recommendations and, hopefully, the answers to the many questions we have.

Is our President compromised? And what do we need to do to protect our Democracy? These are my questions and now I want to know — what are yours? Click here to tell me what you want to see an independent commission investigate. docs.google.com/forms/d/e/1FAIpQLSfJyxkpjf02xZZTQaKAoF9GvIJuf5XzTY-kyN7ih-anF7rr7A/viewform?c=0&w=1

During the hearing that I shared with you above, the experts laid out Russia’s history of cyber attacks and digital warfare over the past decade. Chillingly, they told us that the 2016 election was Russia’s most successful intervention in an election to date. It’s time to ask the tough questions now so that we can protect our Democracy in the future.