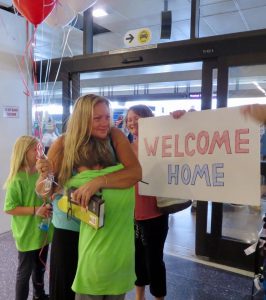 There will be one more Juli party. The memorial for Juli Leeds will be held at the Grace Lutheran Church on Overland Ave. in Culver City on March 25, 2017 at 2 pm, to be followed by a dancehall reception at the Culver City Elks Lodge at 11160 Washington Boulevard. There will be rock and roll, there will be intense political conversation, and there will be lots of people bringing food. Come and share your memories.

The photo shows Juli welcoming her son River back from the El Marino exchange trip to Mexico in 2015, with J.T. Swanson holding the sign.

We called her the ‘Queen of McDonald Street’  because she wasn’t even confined to a particular address. A renter who loved the neighborhood, Juli lived in five different houses on McDonald Street over the space of a decade. If you had somehow lost track of Juli, you could probably just follow the amazing aroma of her cooking, or listen for the sound of music and people laughing. There was barely an occasion that did not merit a party, from Easter Egg Hunts to Halloween, and the constant parade of children trooping through the house made her smile. And bake.

As a private caterer, Juli made a living off of her culinary talents, and those of us lucky enough to be close by, reaped the benefits. “Hey girl! I made seven gallons of chili and we only needed five, how much would you like to take home?” On a birthday, there would be a beautifully decorated cake in your favorite colors, sculpted out of buttercream icing so thick it defied gravity. She had long since mastered the art of making something delicious seem as if it were just a snap of the fingers, but if you saw her kitchen, her ‘mis en place’  was perfect. The right tool, the right ingredient, right where it needed to be. Whatever she was doing – cooking, parenting, volunteering – she gave it all she had.

When Juli discovered that she was having a recurrence of the cancer that had already scarred her, she stayed just as active and twice as resilient. She fought like a tiger, using every treatment available. She never missed a chance to listen to a band, go sailing, or to make her son feel special.

There will be one more Juli party, and we need to give it all we’ve got. For the queen.

Donations in Juli’s memory may be made to Rivers PayPal account at [email protected] or to VITAS Healthcare (hospice program).