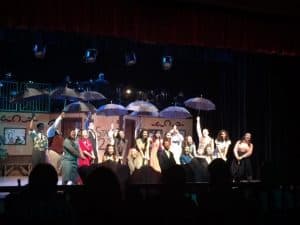 It’s almost too much treasure to count; the creative musical review CULVERCITYLAND that the Blurred Vision Theater of the Academy of Visual and Performing Arts is offering as it’s Spring Musical production is focused on the brilliant history of Metro-Goldwyn-Mayer studios. The talent that has been cultivated throughout the high school was in high polish on Friday at the Vets Auditorium, pretending to be the talent that made the American film musical an art form during the 20th Century.

The ‘book’ between songs varied from a behind the scenes narrative of L.B. Mayer, ( Yogi Sylvain) and Arthur Freed (Sidney Wallace) and others running the studio to a cute collection of “Did you know…?” historical shorts about credits, over-dubs, royalty checks, rewritten lyrics and inspirations. But, like any MGM musical, you will leave humming your favorite tunes. There will be lots of them.

Covering the whole catalogue from The Wizard of Oz to Annie Get Your Gun, the voices were enthusiastic and strong. Among the most notable were Izzy Parra’s gorgeous phrasing and excellent tone on “Our Love is Here to Stay,” and an adorable showdown between Carly Shiever (as Hedda Hopper) and Sarah Toutounchian (as Louella Parsons) ripping through “Anything You Can Do I Can Do Better” as a reflection of the competition between the two gossip columnists vying for the ‘Queen of Hollywood’ title.

Focusing the end of the second half on the Desilu days of  television production at the now-Culver Studios, Isa Berliner gave us the theme from Star 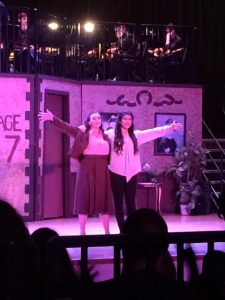 Trek (did you know that Gene Roddenberry wrote lyrics to the theme from Star Trek?)  in a performance any professional opera soprano would be proud of. Berliner also teamed with Izzy Parra for the historic duet of “Get Happy/Happy Days are Here Again” that was originally done by Barbara Streisand and Judy Garland, and then again by Judy Garland and her daughter Liza Minnelli.

They closed the show bringing the whole cast out for the FAME finale “I Sing the Body Electric,” and the whole audience clapped and sang along.

Music was provided upstage by Dr. Tony Spano and the CULVERCITYLAND orchestra.

For tickets go to AVPA.org, or just head to the box office at the Vets Auditorium.