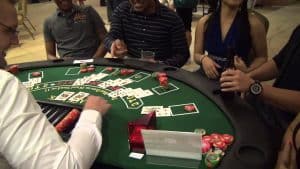 The event raised over $50,000.00, with expenses of less than $5,000.00, with the proceeds supporting Culver City High School teams and clubs. CCHS Alum Larry Zeidman, the organizer and leader of the event, and the Culver City High School volunteer of the year in 2015, was beaming Monday morning. Clearly fatigued from the long event, Zeidman reported that he walked 15 miles on Saturday, all within Veteran’s auditorium and parking lot. Zeidman explained, “It’s a tremendous amount of work, but we had great help at the event and we were able to raise much needed money for the teams and clubs. It was great seeing so many Culver City residents come out to support the cause and have a great time.”

Asked about next year’s event, Zeidman, who has chaired the past five CCHS Booster Club Casino Nights, was non-committal. “Let me have a few months to think about it, I’m just not sure yet.”