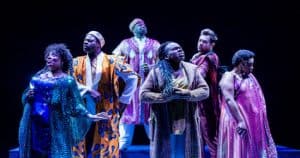 The stars, the constellations, and the myths are an ancient weaving, and knowing how they connect can give you the key to reading them. Ngozi Anyanwu’s premiere work, “Good Grief” offers clues, but not a comprehensive story. The expressions of loss, the memories of a relationship and the frame of a family come through the story like flashes of light, but there isn’t enough consistent illumination to give an understanding of the tale.

Anyanwu has taken on a formidable task, performing the lead role as well as creating the story. As a performer, she’s winning. She has a bright smile, a strong voice, and a powerful physical presence, as evidenced in one comic scene that has her as a professional wrestler. But the non-sequential storytelling becomes harder to follow as the play goes on (or forward, or is that backward, or sideways?) and the narrative interruptions that feature the statements “That wasn’t what happened,” or “That’s not what he said,” create mystery rather than story.

The seven actors who appear at the beginning as royalty, or gods, move through the play as friends, schoolmates, parents, and neighbors. While the characters are all clearly defined, the broken thread of the story keeps us from getting a real hold.

There is so much here worth contemplating – connection and ending, immigrants raising children in another culture, how children define themselves and connect with each other, the loss of a long relationship – it’s frustrating to feel as if it’s just out of reach.

The simple, open set of two bedrooms, punctuated by a bench space between them (also used as a bed) offers a visual subtext of how much of our lives we spend sleeping, or dreaming, thinking that there is all the time in the world.

Because the theme is grief, floating the narrative through fragmented memories does make sense; grief can feel fragmented. But we are not given the tools to bring ourselves into the tale. Presenting trauma in a traumatic style highlights the problem without resolving it.

Given that this is the playwright’s first production, it might be the beginning of a great career. When we are returned to mythology at the end, there’s a sense of tying it all together. But so much is confused, or rushed, or just missing in the middle, there are threads left hanging. The light of human connection flickers too much to offer the clarity that we crave.

For Tickets, go to www.centertheatregroup.org/tickets/kirk-douglas-theatre/2016-17/good-grief/