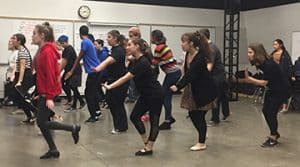 AVPA’s Spring Musical – CULVERCITYLAND – celebrates the Culver City Centennial with a showcase of the music and characters that defined the town as the Heart of Screenland! With memorable and iconic films such as The Wizard of Oz, Singin’ in the Rain, An American in Paris, and Annie Get Your Gun, Culver City was Hollywood central during the film musical’s golden age. Our tribute to the Culver City Centennial will bring to life the songs and characters that made Culver City the “Heart of Screenland.” Great American Songbook tunes by: Irving Berlin, George & Ira Gershwin, Cole Porter, Rodgers & Hart, and a few surprises as well!