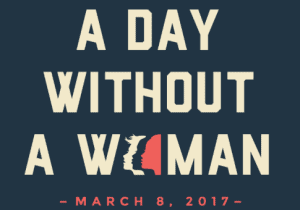 When I first asked another woman about the plans for a strike, she was confused. “So, we are supposed to stop working for the whole day? I mean, how am I going to not feed my children?”

I was just as uncertain. I love the idea of a strike, but so much of the work that women do is the unpaid (and generally unappreciated) work of taking care of their families. I’m wondering if the strike will open anyone’s eyes to how much work women really do.

Plenty of us have jobs that do not allow for an hour off, let alone an entire day. I can’t imagine how many waitresses, housekeepers and sales clerks could just forego a day of wages. Or tell their bosses that they are not coming in for political reasons on Wednesday and still have a job on Thursday.

I’m walking into this one with faith. I went to the Women’s March not having any idea of how it would work or what it would look like, and it woke up the world. What we can do when we all do it together is a force that we have just begun to flex.

So, there are three elements of the strike –

If you can’t take the day, take an hour, any hour, and Do nothing. Refuse to be useful. Go out and play.

At least we can take a moment to recognize the work that we do – both underpaid and unpaid – and just take a snapshot of what that looks like, to ourselves and to the world around us. As the proverb says, if hard work was the ticket to wealth, every woman in Africa would be a millionaire.

I’m thinking of just packing up a picnic basket tonight and eating it tomorrow. Maybe with some friends, wearing red.

As a woman whose hyper-responsible habits tend to define my days, I’m looking forward to it. Whatever the results, it’s an interesting experiment.