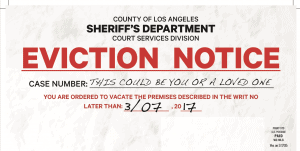 The people pushing Measure S in the upcoming election have crossed a line, and it’s not making them look good. Recently, The Los Angeles County Sheriff’s Department was made aware that a political mailer has circulated depicting an official looking document from the Sheriff’s Department.

According to LASD, “The political mailer depicted in the photos is counterfeit and could mislead members of the public to believe they are subject to legal action by the Sheriff’s Department. The use of this mailer is unauthorized and unlawful under the California Business and Professions Code.”

The letter, signed by County Counsel Mary Wickham, goes on to read: “Your use of the LASD name and your actions in misleading the public are unauthorized and unlawful.” It also demands that the Measure S campaign make amends by “sending notice of correction to all recipients of this mass mailer stating the LASD and the County did not authorize the use of their name or the message contained in the mailer.”

If you have received the mailer depicted, please note it is not an official Los Angeles County Sheriff’s Department document and the political group using this mailer has been put on notice by County Counsel that they must cease and desist using it.

And if you were thinking of voting yes on this measure, consider that people who lie to voters have already shown their stripes.

According to the LA Weekly, “The Measure S campaign’s mailers have become increasingly bizarre as the election nears. Another recent one shows the hands of a presumably homeless person holding a cardboard sign that reads, “House our Vets. Yes on S.”

Measure S has nothing to do with veterans housing and would not build supportive housing for the homeless, though the Coalition to Preserve L.A. does support Measure H, an initiative that would raise the sales tax a quarter of a cent to pay for homeless services. (Again, the Measure S campaign has argued that development leads to displacement, which further exacerbates homelessness.)