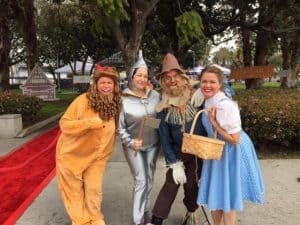 Reflecting on his achievement as he received his Swag Bag prize at the main stage by Culver City Mayor Jim Clarke, Screenland 5K champion Terence Galasco said crossing the finish line first among 3,450 Screenland 5K guests paled to the joy of feeling the sense of community among hundreds of families in Culver City’s Centennial Celebration on Academy Awards Sunday.

“Going into the studios and passing by the entertainment and attractions along the entire course made it one of my most enjoyable races. I felt as if I was part of a large family. Everyone seemed to have a great time,” said the former Boston University distance title holder, who completed the once-in-a-century event on a rain swept morning at 16 minutes, 13 seconds. Harley Richards placed second at 16:45, followed by Stevie Steinberg at 16:52.

Wendy Hamill, President of the Culver City Education Foundation, the major beneficiary of the Screenland 5K, welcomed the runners and walkers and then joined them on the course, which passed 15 entertainment attractions, snaked into Sony Pictures Entertainment and The Culver Studios, showcased 100 points of lore on the Centennial Trail and finished on the red carpet with Culver City PTA Council’s Scarlett O’Hara, Rhett Butler, and Wizard of Oz characters.

Entertainment through the run was provided by both the Academy of Visual and Performing Arts at CCHS, and Dee-Lightful Productions, Culver City’s best children’s theater, offering Allegra Williams as ‘Marilyn Monroe’ and Louis Chavez as ‘Tootsie’ cheering the runners through the studios. 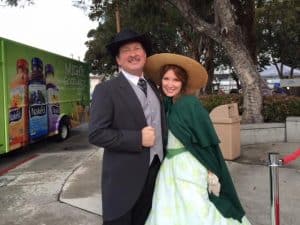 More than 100 Swag Bags filled by local merchants were presented to the best Culver City movie and TV themed costumed guests in a fun contest led by Culver City Board of Education Vice President Anne Allaire. Hundreds of runners came in costume, and group themes created team of friends and family like the Okelo clan, with Sande and Karen racing with their 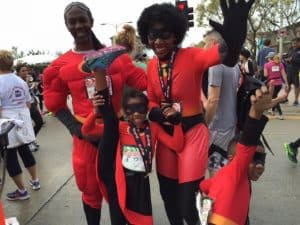 children Elle and Solen as The Incredibles.

Held in the memory of the late Parks and Recreation Director Syd Kronenthal, who founded the city’s venerable Western Hemisphere Marathon, the Screenland 5K featured Olympians and national track champions to inspire the more than 3,000 guests.

Screenland5K, conducted by 170 volunteers, is sponsored by the City of Culver City and sanctioned by the Culver City Centennial Celebration Committee and Culver City Downtown Business Association.