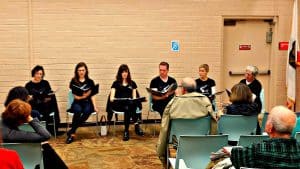 Every month, performers from the nationally acclaimed theater company The Actors Gang come to the Culver City Library to read scenes from Pulitzer Prize-winning plays, in celebration of the Pulitzer Prize’s 100th Anniversary!

This month: Join members of The Gang as they read scenes from Wendy Wasserstein’s touching comedy “The Heidi Chronicles,” a story of empowerment and inspiration. Winner of the 1989 Pulitzer Prize and Wasserstein’s most popular play.

The plot follows Heidi Holland from high school in the 1960s to her career as a successful art historian more than twenty years later. The play’s main themes deal with the changing role of women during this time period, describing both Heidi’s ardent feminism during the 1970s and her eventual sense of betrayal during the 1980s.