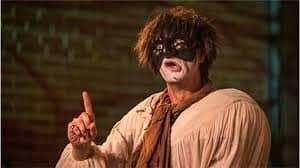 The Actors’ Gang’s new musical production of Harlequino: On to Freedom will have its U.S. Premiere in March, as part of the theater’s 2017 Spring Season of Justice. Written and directed by Tim Robbins, the new musical combines Commedia dell’Arte, Shakespearean tragedy, live music and sophisticated comedy to produce a dialectic on the meaning of freedom. The musical had its European Premiere at the Spoleto Festival, in Italy, and it subsequently toured to Shanghai and Beijing where it was censored by government officials. Harlequino: On to Freedom begins previews Thursday, March 16, opens on Saturday, March 18 and runs through May 6, 2017,

Harlequino: On to Freedom celebrates a particular kind of theater created by Italians 500 years ago, the Commedia dell’Arte, and explores the 16th century actors’ limits of free expression in the authoritarian environment they lived in. As the story evolves, a conflict between a group of rogue actors and a Commedia dell’Arte expert becomes a battle for the soul of the Commedia, questioning the purpose of art, what is funny and who writes history. Ultimately the musical asks the question: What must the artist risk to live freely in today’s world?

“Give us your tired, your poor, your huddled masses, and we will crack their brains.”
– Julian Beck & Judith Molina, The Living Theater

“One of the things that fascinates me is that there are no surviving texts from the first 80 years of this art form. The early Commedia dell’Arte companies performed in town squares, on the streets, carrying news, they were satirists and they could not afford to be inaccurate or boring or pedantic. They were telling stories about the struggle between the rich and poor, between true love and love arranged as a business deal. Ultimately the question we kept returning to in developing this piece was, What happened to those early texts, and who were these rogues that were telling truth to power?” says Tim Robbins.

“Just think of Ruzzante, whose work was banned, and only became known centuries later, because the sarcastic and grotesque humor that this cultured man managed to employ involved not only mockery but was also accusatory.” – Dario Fo, Nobel prize winning playwright

In researching Harlequino: On to Freedom, Robbins discovered an account from the 16th century that tells of a Duke Gonzaga of Mantua who, after watching a Commedia play, ordered three of the actors to be executed. Although no text survives, this incident raises questions about the nature of the relationship between power and society’s truth tellers. “We began to see a connection between those 16th century performers and artists in today’s world. From threats of eliminating the NEA to the radical suppression of art by Caliphates and fundamentalists, these questions have a deep resonance in today’s environment.” says Robbins.

The Actors Gang has throughout its history developed theater that reflects the concerns of society, shining a light on the nature of those in power while celebrating the stories of the anonymous and marginalized. Robbins’ Iraq war satire Embedded opened in Los Angeles in July 2003, two months after President Bush landed on an aircraft carrier and declared ‘Mission Accomplished.” It was the first American play to call to question the atrocities of that war and the mainstream press’ compliance with the Bush administration agenda. Embedded played to sold out audiences in L.A., in New York and London, and subsequently toured throughout the United States. In 2007, Le Petit Théâtre de Pain, under the direction of Georges Bigot toured Embedded for a year throughout France.

The last play Robbins wrote and directed, Break the Whip (2010), explored the class divisions of the English settlers and the early bonds between indentured Europeans, African slaves and indigenous people in the Jamestown Colony in the years 1609-1623.

Inspired by Howard Zinn’s “A People’s History of the United States,” the play dismissed historical favorites John Smith and Pocahontas in favor of “the anonymous, the indentured and enslaved, the muted voices, the vanquished.” Break the Whip played to sold out audiences for 10 weeks in Los Angeles.

Harlequino: On to Freedom is dedicated to the Nobel prize-winning playwright Dario Fo who offered his support and tutelage to Robbins, a mentorship that continued through the summer of 2016, shortly before Fo’s death at age 90.