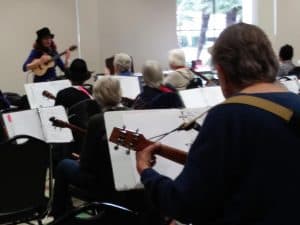 The Culver City Senior Center’s resident ukulele band, the CC Strummers, has expanded well beyond anyone’s expectations, and their reward has been to bring joy to more people, says director Cali Rose.

Once a small group of music-minded seniors attracted to the idea of playing a ukulele – a small guitar with four strings that’s easy to master by nearly anybody – and singing once a week, the group has grown to more than 70 members in six years who practice twice a week from their growing repertoire of ukulele-friendly songs and perform in concerts for events like the expansion of the Culver City Expo Line, Fiesta la Ballona and Centennial 5K Run.

Under the direction and instruction of professional musician Cali Rose, the group has also moved into new areas of outreach, carrying the magic of music to senior care centers, junior high students and the children’s intensive care unit at The Mattel Children’s Hospital.

The experience of watching music make seniors who seldom walk get up and dance at the Opica Adult Day Care Center is a thrill for both the seniors and the Strummers. They start playing after lunch, when the seniors are ready for a nap, but boisterous laughter and fascinating rhythms entice seniors to watch, listen, and even cut a rug — language from their youth that means dance enthusiastically.
Caretakers in charge of seniors say how the music session resonates at a vital level and patrons who are non-responsive have been known to sing and even dance to the rhythms.

Children in intensive care are visited by a small band of five to six Strummers, who not only play and sing but give ukuleles to young patients and their families. Patients can practice and play songs they learn and parents can sing along, after just three appearances by the Strummers.

The program is so popular that the staff is buying ukuleles to serenade the patients, who are by necessity kept away from the general public and outside activities. The ukuleles donated by the Strummers are from an organization which is dedicated to providing musical instruments to children in need.
A small outreach of Strummers takes turns at the Marina Elementary School once a week, assisting students learning to play ukuleles provided by the group to sing favorite songs. The students may even perform for their peers at an assembly.
Made up of seasoned musicians and never-evers, the CC Strummers will be entertaining runners at the bottom of Culver Boulevard at Sunday’s Centennial 5k, with a program of songs from movies made right here in Culver City.
They are not unacclaimed. Cali Rose and the CC Strummers were the Culver City Senior Citizens Association Seniors of the Month in January.