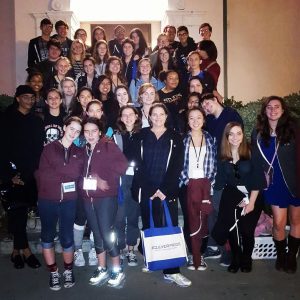 Students from Culver City High School’s Academy of Visual and Performing Arts recently attended the Annual CETA High School Theatre Festival, where had the opportunity to develop their skills by participating in three sessions of workshops led by professionals in the industry that encouraged artistic growth for high school students and their teachers.

At the event, 14 AVPA Theatre students were honored with Certificates of Merit for their work on Almost, Maine, a romantic comedy is about a town “that’s so far north, it’s almost not in the United States – it’s almost in Canada. And it almost doesn’t exist, because it’s residents never got around to getting organized. So it’s just…Almost.” The performance, presented by AVPA in November, featured residents of Almost find themselves falling in and out of love in the strangest ways. The New York Times called the play “beautifully structured” and “a whimsical approach to the joys and perils of romance.”

Congratulations to: Carly Shiever (Rhonda), Evan Wasser (Dave), Gabe Lobet (Randy), Ben Hilsberg (Chad), Erin Hamill (Marvalyn), Owen Jones (Steve), Hazel Cupp (Sandrine), Dillon Zehnder (Phil), Joey O’Neal (East), Isa Berliner (Glory), Henry Rehor (Jimmy), Sarah Toutounchian (Waitress), Rebecca Mirvish (Stage Manager) and Simon Johnson (Production Manager).
CETA is an amazing opportunity for theatre students to nurture their talent among their peers from all over California, in a creative environment of working professionals dedicated to theatre arts education, and CCHS theater teacher Jill Novick, Creative Director of Theatre AVPA, said her students deserved the recognition they received at the CETA festival.
“I am so proud of all my AVPA Theatre students!” she said. “They all worked so hard on the production, so it was really nice to be recognized at the festival. We had a great time!”