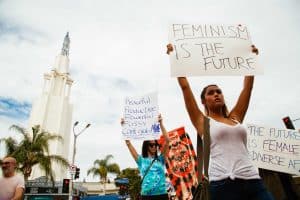 What was originally planned to be an event at the Hammer Museum in Westwood created such a response that it had to be moved to UCLA’s Royce Hall. Monday, February 6, 2017 saw the venue packed with people of all kinds looking for a ‘post-election’ connection, and a way to get involved.

“This is unprecedented,” Hector Villagra, the Executive Director of the ACLU of Southern California. “I have never seen this level of interest in activism, not ever.”

The panel of speakers, drawn from a wide range of organizations supporting civil rights, was moderated by Jessica Yellin, former CNN Chief White House Correspondent. The discussion of what was happening in the current political moment and why it had set off such an overwhelming interest drew thoughtful and provocative comments from the panel, and strong applause from the audience.

“The only thing that comes close, in my community,” noted Lorri L. Jean, the CEO of the Los Angeles LGBT Center “was the AIDS crisis. People were dying – everyone knew someone that was sick, or had died – and the government would not even admit there was a problem.” How this sparked more people to connect, to volunteer, to work together created the activist network that ultimately passed marriage equality with the Supreme Court.

Susan Dunlap. the President of Planned Parenthood Los Angeles, spoke about how women were coming to Los Angeles to access healthcare services that were no longer available to them in their own cities, either from the legal restrictions put in place, or “just out of the fear that someone would see them, someone would judge them, and they would have to fear whatever retaliation that might be coming their way.”

“When you allow the other side to frame the argument, you have already lost.” Devon Carbado, the Honorable Harry Pergerson Professor of Law at UCLA made several brilliant observations about law and language. “They have made Roe v. Wade their rallying cry for decades. We do not have any single Supreme Court case that we can use to draw that kind of energy.”  Rolling through a list of rulings including ‘Citizens United‘ and the rollback of the Voting Rights Act, Carbado focused on the challenge of bringing a group of diverse interests to bear on a single issue. What would that issue be?

The focus of the evening – what to do now – had specific answers from two on the panel. Angelica Salas, Executive Director of the Coalition for Humane Immigrant Rights of Los Angeles (CHIRLA) said “We are focused right now on getting everyone who qualifies as a citizen sworn in as a citizen. Whatever the challenge, if you think you qualify, come to us and we will help. We will help you with the paperwork, with the expenses – We want to move as many people as possible out of the gray area and into solid citizenship.” She said the need for volunteers and fundraising was immediate and invited the audience to step up.

Jean also offered her office as a recruitment point for an upcoming campaign. ” If you have volunteer time, we will put you to work.”

Villagra, Salas, Carbado, Jean and Dunlap all engaged with Yellin as leaders who were keenly aware of the challenge they faced, but excited and enthused about the number of people looking to connect with civil rights activism.

Leaflets distributed outside the event called for a General Strike on Feb. 17, 2017.