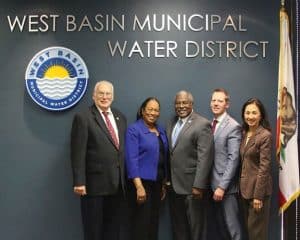 “I’m looking forward to serving my first term as Board President and continuing to build the legacy of service my predecessors have established within our service area and in the greater community,” said Williams. “I am dedicated to upholding West Basin’s commitments to its customers and publics, and to continuing the District’s strategic approach to ensuring water reliability.”

As President, Williams will serve his third year of service on the West Basin Board. He was first elected in November 2014 to represent Division I cities of Carson, the Palos Verdes Peninsula and portions of San Pedro. As a professional civil engineer, he has served as president of the American Public Works Association-Southern California Chapter, president of the City and County Engineers Association, and treasurer of the Los Angeles Council of Black Professional Engineers. He is also a board member of the National Water Research Institute, a member of the CalDesal Executive Committee and a member of the Los Angeles County Building Board of Appeals. Williams recently received the 2015 Top Elected Official award from the Southern California Chapter of the American Public Works Association.

Dear, who was re-elected in November 2016 to represent Division V, will serve as West Basin’s Board Treasurer. First elected to the West Basin Board in November 2000, Dear represents the cities of Gardena, Hawthorne, Lawndale and portions of El Camino Village. He is one-of-two West Basin representatives on the Metropolitan Water District of Southern California (Metropolitan) Board of Directors. Dear has a long record of public service, serving as Gardena mayor for nine consecutive terms before retiring in 2001. Since 2004, he has also served on the Local Agency Formations Commission and is currently first vice chair. He is also a widely respected, award-winning teacher who taught at Stephen White Middle School in Carson for 37 years.

This year, Gray will serve as Secretary. She was first elected to the West Basin Board in 2006 as the first African-American woman elected to the board in its almost 67-year history. Gray represents Division II cities of Inglewood, South Ladera Heights, a portion of Lennox and Athens, Howard and Ross Sexton. She currently serves as a West Basin representative on the Metropolitan Board of Directors.

As immediate past president, Kwan will serve as a board member in 2017. She was first elected to the West Basin Board of Directors in 1996 as the first female and Asian-American member to serve on the Board, totaling 21 years of service to District. Running unopposed, Director Kwan successfully secured re-election in November 2016 to represent Division III cities of Hermosa Beach, Lomita, Manhattan Beach, Redondo Beach, a portion of Torrance, and unincorporated Los Angeles County areas of Harbor Gateway.

Also appointed during the January board meeting were West Basin Chief Financial Officer Margaret Moggia as Deputy Treasurer and Board Secretary LaTonya Dean as Deputy Secretary.

The election of officers of the Board of Directors facilitates the appointment of committees and assignment of representatives to affiliate organizations, as well as the operations of West Basin.

West Basin is governed by a five-member board of directors who represent 17 cities throughout its 185-square mile service area in coastal Los Angeles County. The district is committed to providing a safe and reliable supply of high-quality water to its communities.