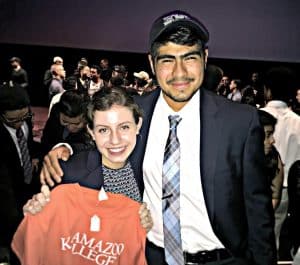 Culver City Unified School District is proud to announce that Centaur seniors Dante Alexander Herrera and Gabrielle Walton Schwartz have been named Posse Scholars, earning four-year, full-tuition scholarships to the schools of their choice in the fall. Dante plans to attend Hobart and William Smith College in Geneva, New York; and Gabby will enroll at Kalamazoo College in Kalamazoo, Michigan in the fall.

The Posse Foundation awards scholarships to students who show academic and leadership potential. The application process begins with a nomination by someone at the student’s high school or a community-based organization in which they are involved. Once accepted, scholars are placed at a Posse partner college or university in a supportive, multicultural team – or “posse” – of nine fellow scholars.

Dante, who plans to explore biochemical or molecular biology as his major, hopes to be able to develop new technology that would help us to replace fossil fuels with biofuels. It follows then, that his favorite classes have been AP Chemistry, Calculus, and Environmental Science. Dante had the opportunity to participate in two rigorous STEM-based summer programs, which provided him with college level lab and engineering experience.

“Dante is a huge part of our school culture,” said CCHS Guidance Counselor Daniel Fagas. “He is ready for the challenges of college and looks forward to learning more about himself and the world. Dante has developed a great balance between academic achievement and extra-curricular involvement. His innate abilities, as well as his solid, honest, trustworthy character combined with his drive, determination and work-ethic guarantees he will excel and make a rich contribution.”

At just 3-years-old, Gabby started gymnastics, and by age 6, she was competing. Currently, Gabby is competing at the highest national level (10) and practices 25 hours a week in the gym, takes five AP classes, and volunteers at Cedars Sinai Hospital on Sundays, assisting nurses with patient care.

Gabby has aspirations of studying Public Health with a focus on Policy and Research.

“I thought about becoming a doctor, but then I decided that I could have a much bigger impact on many more people if I could help bring appropriate medical treatment and supplies to third world countries and impoverished regions of the world,” she said.

“Gabby is outstanding in every facet,” said her Guidance Counselor Steven Gyepes. “She’s smart, athletic, altruistic, and able to overcome obstacles. There is no doubt in my mind that Gabby is truly the type of person that exemplifies the notion that each of us has the potential to change the world.”