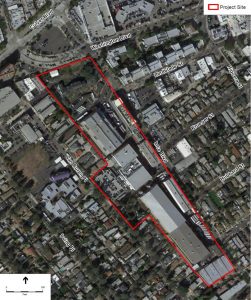 Hackman acquired the 14-acre property at 9336 Washington Boulevard in 2014, paying $85 million to the now defunct investment bank Lehman Brothers. Discarding a rumored transformation of the scenic property into either condominiums or office space, the Los Angeles-based developer is instead embarking on an ambitious expansion of the studio’s back lot.

According to the environmental report, the project would include the construction of five new media buildings which would offer a mixture of production space, offices and digital media stages. The new facilities would replace several existing structures that contain a combination of support services and office space. At completion, the project would result in a net increase of 413,000 square feet across the Culver Studios campus.

The Gensler-designed development also calls for the construction of two new parking garages on the property, with a combined capacity of nearly 2,000 vehicles.

Construction of the Culver Studios expansion is expected to begin in 2018, pending approvals, with completion anticipated by mid-2020.

Hackman recently purchased the adjacent Culver City Parcel B development site, which is slated for a combination of offices and retail space.