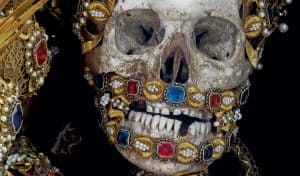 Many years ago, I had a t-shirt that read ”Film is Art. Theater is Life.” The production of Adler and Gibb at the Kirk Douglas Theater takes this slogan and gives it an intense translation into flesh and blood.

The simple, stripped down set of a few chairs, two standing microphones, a shelving unit full of very strange stuff, and an enigmatic box of dirt offers almost nothing to allow the mind to create meaning. A girl wearing headphones, holding a small rifle walks forward and hands the gun to a member of the audience, and a long moment later, takes it back.

This small bit of business is a powerful coda for the whole production; can we offer you something dangerous? Well,  just for a brief time.

This is a delightfully dangerous play, taking on the the very concepts of Theater, Art, Film, celebrity and reflection in a short form that isn’t tough to follow and yet is punctuated by mystery.

A woman, applying for a scholarship, offers carefully researched information on Janet Adler, an artist of the mid- 70’s West Village set, and her art and life partner, Gibb.

Two people, a man and a woman, arrive at a seemingly deserted house to find out what might be inside – and to work on a ‘character’ of Janet Adler for an already ‘green lighted’ film. What they discover inside the house goes far beyond what they were expecting.

There are brilliant twists in the terse plot, a narrator seated at the back of the set who is pointedly never audible, and a child walking through the action handing out props like plastic lobsters and a bouquet of branches. As a theatrical door opening for young actors in Culver City, the role of “Child” is played by several different local children.

As a DouglsPlus production, Adler & Gibb won’t be on the boards for long, so get to the KDT and take it in, and be sure to take many people with you. The discussion after the play will be about, film, art, theater and life.

For tickets go to centertheatregroup.org