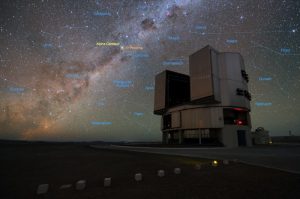 The European Southern Observatory (ESO) has signed an agreement with the Breakthrough Initiatives to adapt the Very Large Telescope instrumentation in Chile to conduct a search for planets in the nearby star system Alpha Centauri. Such planets could be the targets for an eventual launch of miniature space probes to Alpha Centauri by the Breakthrough Starshot initiative.

The discovery in 2016 of a planet, Proxima b, around Proxima Centauri, the third and faintest star of the Alpha Centauri system, adds even further impetus to this search.

Knowing where the nearest exoplanets are is of paramount interest for Breakthrough Starshot, a research and engineering program launched in April 2016, which aims to demonstrate proof of concept for ultra-fast light-driven “nanocraft,” laying the foundation for the first launch to Alpha Centauri within a generation.

Detecting a habitable planet is an enormous challenge due to the brightness of the planetary system’s host star, which tends to overwhelm the relatively dim planets. One way to make this easier is to observe in the mid-infrared wavelength range, where the thermal glow from an orbiting planet greatly reduces the brightness gap between it and its host star. But even in the mid-infrared, the star remains millions of times brighter than the planets to be detected, which calls for a dedicated technique to reduce the blinding stellar light.

Detecting and studying potentially habitable planets orbiting other stars will be one of the main scientific goals of the upcoming European Extremely Large Telescope (E-ELT, http://www.eso.org/e-elt). Although the increased size of the E-ELT will be essential to obtaining an image of a planet at larger distances in the Milky Way, the light collecting power of the VLT is just sufficient to image a planet around the nearest star, Alpha Centauri.

BREAKTHROUGH STARSHOT is a $100 million research and engineering program aiming to demonstrate proof of concept for a new technology, enabling ultra-light unmanned space flight at 20% of the speed of light, and to lay the foundations for a flyby mission to Alpha Centauri within a generation.
The Starshot concept envisions launching a “mothership” carrying about a thousand tiny spacecraft (on the scale of centimeters) to a high-altitude orbit and then deploying them. Ground-based lasers would then focus a light beam on the crafts’ solar sails to accelerate them one by one to the target speed within 10 minutes.
If an Earth-size planet is orbiting within the Alpha Centauri system’s habitable zones, Breakthrough Starshot will try to aim its spacecraft within 1 astronomical unit (the Earth-Sun distance, or 93 million miles) of it. From this distance, a craft’s cameras could potentially capture an image of high enough quality to resolve surface features.
The fleet would have about 1000 spacecraft, and each one (dubbed a StarChip) would be a very small centimeter-sized vehicle weighing a few grams. The spacecraft would be propelled by a square-kilometer array of 10-kilowatt ground-based lasers with a combined output of up to 100 gigawatts.
Each spacecraft would transmit data back to Earth using a compact on-board laser communications system using its solar sail as an antenna and the propulsion array as the receiver. A swarm of about 1000 units would compensate for losses caused by interstellar dust collisions en route to the target.