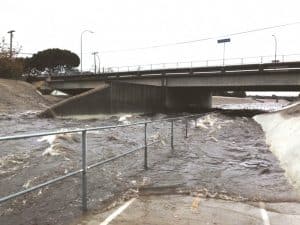 Thursday’s weather may be more than annoying for drivers; it could be dangerous. The possibility of heavy rain creates what National Weather Service forecasters are calling “a risk of urban flooding and of mud and debris flows down slopes denuded by wildfires”.

The NWS issued an urban and small stream flood advisory scheduled to be in effect until a 9:15 this morning in eastern L.A County in response to Doppler radar. Automated rain gauges are indicating moderate to occasionally heavy rain falling over a wide area between the Palos Verdes Peninsula and the foothills of the San Gabriel Mountains.

Forecasters urged motorists who encounter flooding to immediately turn around.

“Most flood deaths occur in vehicles,” noted an NWS statement.

Along the coast, a beach hazard statement will be in force until 10 a.m. in L.A. and Orange counties. Expected is surf of three to five feet with sets of up to seven feet. Ocean conditions Thursday will create a risk of drowning for swimmers and surfers, forecasters warned. Anyone caught in a rip current should stay calm and swim parallel to shore until able to break free.

The storm is expected to linger until Friday morning.