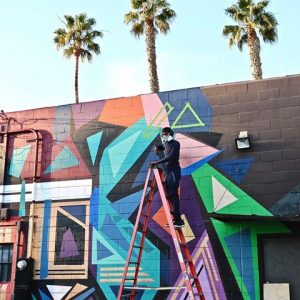 Culver City continues to grow it’s reputation as a mural mecca. This month, The Compound Salon has added some outdoor art by giving two walls to artist Rob Hill to create beauty with color. Artist Hill also has solo art works hung inside the salon, and The Compound will be thanking him by hosting an evening of appreciation. Saturday, Jan, 21 from 7 pm at 6136 Washington Blvd. Pieces will be available to purchase that night, including one-of-a-kind hand painted clothing by Rob. Slim Jeff and his band will also be adding to the atmosphere with live music.
Rob Hill is an American abstract painter and designer based in Los Angeles. He was born in Harbor City, CA and graduated from Narbonne High School in 2004. He is a self-taught artist, painting in a geometric abstract style. Rob was introduced to art through fashion. His first artistic works were wearable items displaying forms of abstract expressionism. In 11th grade he started a clothing company offering hand-painted garments to students across the greater Los Angeles area. After graduating high school Rob joined the United States Coast Guard. Although he did not create art during his 8 years of service Rob was able to travel internationally, collecting cultural experiences that would later influence his art.

In September of 2013 Rob underwent stomach surgery. While hospitalized he was inspired to shift focus towards creating one-of-one fashion designs. Shortly afterwards he began painting on clothing once again, employing a completely different style from his earlier works on wearable garments. Rob began painting on canvas and experimenting with new layering techniques, using a hard-edge masking process to create abrupt disruption between colors, and meticulously laying gold lines over layers of colorful shapes. At the time he was fascinated with ancient Egyptian art and design, keying in on the importance of gold in Egyptian culture.