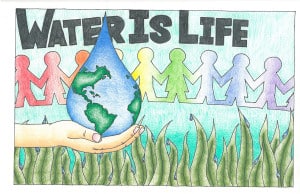 As much of the state heads into a sixth year of drought, water officials on Wednesday, Jan. 4, cheered Californians’ continued conservation while urging them to stay stingy with water after residential savings slipped below 19 percent in November. Statewide, residential water users cut back by 18.8 percent that month, compared to November 2013 water usage, according to figures released Wednesday by the State Water Resources Control Board. With the Sierra Nevada snowpack and its water content measuring about 70 percent of the average for early January, California’s cumulative water savings from June 2015 through November 2016 was 22.6 percent.

At a Wednesday board meeting, State Water Resources Control Board Chairwoman Felicia Marcus applauded residents’ water conservation, especially in Northern California, which got more rain than southern parts of the state from October through December.“Californians are continuing to conserve, which is the way it should be, given that we can’t know what the future will bring. But we know that we can’t take water for granted anymore,” she said.

“It was especially good to see another month of impressive increases in conservation in Northern California.”

Since state-mandated water conservation began in June 2015, Californians have saved 2.35 million acre-feet of water, or 765 billion gallons — equal to a year’s worth of water for 11 million people, or 28 percent of the state’s 2016 census-estimated population of 39,250,017. The November 2016 savings are down from 19.6 percent in October and 20.2 percent in November 2015 under Gov. Jerry Brown’s state-imposed conservation mandates, which ended June 1.

Suppliers then set their own savings targets under revised emergency water conservation regulations. Most were set at zero percent by suppliers who believe they’ll have enough water to meet demand for the next three years. In November, dozens of Northern California suppliers saved 30 to 62 percent, while 44 percent of suppliers, or 174, saved more than 20 percent, compared to 2013 use that month.

Beverly Hills, which was fined $61,000 in October for not meeting savings mandates, saved 18.9 percent.

Elsewhere in Los Angeles County, other high savers in November include Downey at 22.3, Santa Monica at 21.6, South Pasadena at 20.5 and El Segundo at 20 percent.

Lower performers included Los Angeles County Public Works Waterworks District 29, which used 7.9 percent more in November 2016 than November 2013. Torrance did not submit water conservation data for September, October or November by Dec. 20, according to the state.

A public workshop on whether to extend emergency water conservation regulations will be held Jan. 18 in Sacramento. State water board staff expect to present their proposal to extend the regulations, based on water supply and savings, to the board in February.

Winter storms and conservation levels are being watched closely as water officials consider a return to state-imposed savings targets, which could be included in the proposal.

“We all need to become more efficient with our limited water supplies year in and year out,” she said.