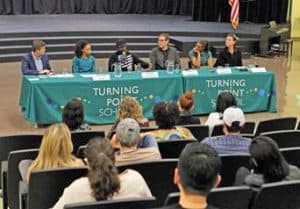 The most decorated American woman in Olympic track and field history is learning from failure, pursuing goals the “right way” and maintaining “balance” in life. Allyson Felix, whose nine Olympic medals are the most of any U.S. female track and field athlete in the Games, shared her athletic experiences and offered thoughts on how adults can positively support children’s involvement in athletics at a sports panel held at Turning Point School, a Screenland 5K Golden Wizard sponsor.

Screenland 5K Sundays training session leader Rod Dixon, the Olympic bronze medalist who won the New York Marathon, joined Felix on the panel with Shawn Crawford, a four-time national outdoor 200-meter champion and Olympics multi-medalist, Ginnie Crawford, a two-time NCAA track indoor and outdoor champion and two-time USA outdoor titleholder, and physical therapist Robert Forster, who has treated 54 Olympic medalists, NBA players, and mixed martial arts world champions.
In front of an audience of parents, school officials, students and Screenland 5K registrants, the accomplished panelists described ways of teaching youth to pursue goals with honor, take baby steps, develop character, measure success in numerous ways, be faithful to oneself and, equally as vital, enjoy the journey.
Will Segar, Elementary Division Head, led the symposium, which was a part of the Turning Point School’s Parent-Speaker Series that includes highly-regarded experts in the field of education and child development.
Segar, a Culver City resident and father of an elementary school aged boy and girl, said the guests helped him see “how our kids can connect joy with resilience, competition with optimism, and health with confidence.”
The five panelists joined faculty in leading Olympic style activities on the school field after the symposium. Felix and Dixon shared their Olympic medals with the students to hold.
National title holder Ginnie Crawford, who teaches at Turning Point School, is training students, faculty and parents for the Academy Awards day event that follows the yellow brick road into two legendary movie studios and onto the Centennial Trail.
“I can power up hills and sprint, but running a 5K is a challenge for me,” said Crawford who will run with a sizeable Turning Point School 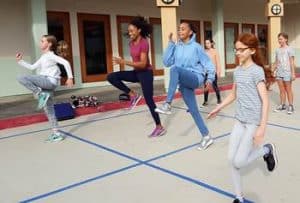 contingent at the Screenland 5K. “We’ll be ready for a rewarding run and walk on Feb. 26,” said Crawford.
Dixon, an advocate for children’s health and fitness brings his KiDSMARATHON program into Culver City for the Screenland 5K, educating kids about exercise and nutrition, empowering youth to take their health into their own hands, and inspiring children with visits from running champions.
Run or walk past storied movie and television soundstages, dash through a soaring rainbow, follow the yellow brick road onto the Centennial Trail, and stride like a screen star down the red carpet in your once-in-a-century 5K journey on Academy Awards Sunday morning in the Heart of Screenland. For event info, www.Screenland5K.com.