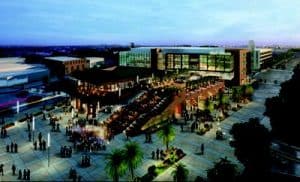 A longstanding proposal to transform a site in the heart of Downtown Culver City is moving forward, but under new management. How much change will be happen to the development currently scheduled is unknown.

Plans have been in the works for over five years to turn a city parking lot near the Culver Hotel, known as Parcel B, into a 110,000-square-foot office and retail complex. Last week, a new developer stepped in to complete the job. According to The Real Deal, Hackman Capital Partners bought the development rights to Parcel B.

Hackman is taking over from the previous developers, Hudson Pacific Properties and Combined Properties, which, in 2011, were tapped by Culver City’s City Council to develop the parcel at 9300 Culver Boulevard. Hudson and Combined’s redevelopment plan was for a project called Culver Steps, (see artist’s illustration above) which called for 45,000 square feet of retail, 65,000 square feet of offices, underground parking, and a 10,000 square foot public plaza for concerts, farmer’s markets, and outdoor movies.

It’s unclear how much will change in the transition.

One interesting wrinkle that Hackman’s involvement brings to the project is that Parcel B happens to sit right across the street from another high profile Hackman acquisition, Culver Studios. Hackman purchased the studio in 2014 for about $80 million. Reports at the time said once the studio’s current leases were up, it would be “shuttered for good.”

In November, Hackman announced it had acquired a two-story, 74,000-square-foot building at 5500 West Jefferson Boulevard, which it plans to turn into creative offices, saying:

Hackman Capital is no stranger to the area’s revitalization. Through its affiliates, the real estate investment and operating company has already converted seven industrial warehouses in Culver City to creative-office campuses, now home to Westwood One Studios and Apple Computer’s Beats by Dre headquarters. In 2014, Hackman Capital also acquired The Culver Studios, the iconic movie studio sitting on 14.3 acres in city’s coveted downtown.
New renderings for Parcel B weren’t released, but, as The Real Deal notes, the city’s website says it’s collaborating with Hackman for work to begin in 2017.