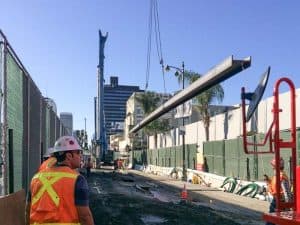 U.S. Transportation Secretary Anthony Foxx is expected to join Metro and other local officials this morning to announce federal funding that will be used to take the Purple Line subway 2.6 miles further and a step closer to a larger goal of extending the line to Westwood.

Metro officials have requested at least $1.19 billion in federal New Starts grant dollars, and a $307 million low-interest loan from the U.S. Department of Transportation, to build the second portion of a 9-mile extension that runs mostly down Wilshire Boulevard and will eventually end near the UCLA campus.

For the part of the extension expected to receive the latest batch of federal funding, Metro officials say they are planning to build an underground route and two new stations, one at Rodeo Drive and Wilshire Boulevard, in Beverly Hills, and another in Century City, near the Avenue of the Stars, a hub of office buildings frequented by an estimated 358,000 workers.

The funding is expected to be announced by DOT and Metro officials, as well as LA Mayor Eric Garcetti, at a former condo development site on Constellation Boulevard in Century City.

The project has an estimated total cost of at least $2.38 billion, according to a U.S. DOT funding recommendation report. Roughly a quarter of the costs will be covered by about $585.7 million from revenue generated by Measure R, a sales tax hike approved by voters in 2008.

The Purple Line is a key part of the LA 2024 Olympic bid committee’s effort to stage the Games in Los Angeles, with the group picking UCLA, with its existing sporting facilities and dorms, as the possible site for the Olympic Village. The city is in the running against Paris and Budapest for the opportunity to host the Olympics, with the International Olympic Committee scheduled to pick a city in September.

Local transportation officials have taken steps secure enough funds to accelerate the project from its original 2035 completion date, which will help the city’s Olympics boosters, who include Garcetti, to bring the Purple Line route to Westwood by 2024. Measure M, the half-cent sales tax hike approved by Los Angeles County voters in November to fund transportation projects, calls for speeding up the construction of the Purple Line so that it is completed between 2024 and 2027.

The first part of the Purple Line extension project that runs 3.9 miles through the Miracle Mile area received a $1.25 billion New Starts grant and a $856 million loan from the U.S. DOT in 2014.