There have been many comments in the media that 2016 was just a bad year, as if time itself were somehow responsible for the election, the death toll, the refugee crisis and the roiling waters of international politics. Culver City has always been a bellweather; Harry Culver designed it to be one. Looking back at the stories we have covered here, it looks as if 2016 is a year our local news can look back to for many good reasons.

Culver City Crossroads publishes five stories a day, five days a week, so that’s 1300 stories in this past year (allowing for the infrequent slow day, we can stand firm on about 1275 at least) and that is a lot of local news. Our focus here is on the kind of news that makes people feel good, and gives them ways to get connected. The motto of “Think globally, act locally” has a good home in Culver City, and some of the things we have done will inspire other towns and schools. Meanwhile, we can be pleased with what our notable stories mean to us.

It was a pretty good year, around here … 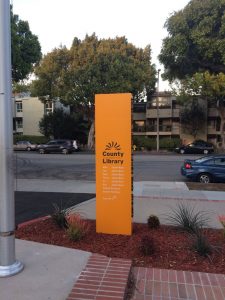 February was when the library re-opened after renovations and upgrades making it the only ‘zero-sum’ building owned by Los Angeles County.”The 101-year-old Julian Dixon Library reopened February 20th with a whole new look inside and out, from the lobby’s cool circular chandeliers to the giant canopy in the parking lot. “Not one parking space was lost,” said Laura Frakes, community library manager. “We are very proud of that.” As the staff and the Friends of the Library greeted patrons returning after 13 months of construction, 384 photo voltaic solar panels installed on the roof and on a canopy in the parking lot supplied power to the new LED lighting system, 28 new computers, self-checkout system and all other energy needs.”

March had a new mural painted at CCHS by international artists Jasmin Siddiqui and Falk Lehmann, known together as Herkut. ’The striking mural at Culver City High, completed last week, features a multiracial girl modeled after a member of the student body. On each hand, she wears a wolf’s head — one black, one white; the text, a Native American proverb, is splashed across the backdrop in Herakut’s signature drippy graffiti style. It reads: “There is a battle of two wolves inside of us. One is good. It is joy, peace, hope, humility, kindness. One is evil. It is anger, jealousy, greed, resentment, lies, inferiority and ego. And the wolf that wins is the one you feed.” The mural’s message is inciting as much reaction as the art itself. Text is as 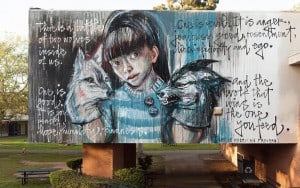 essential to Herakut’s creations as the large-eyed, spindly-limbed, big-headed humans and fable animals that are their trademark.”

In April, Council member Meghan Sahli-Wells won The Firefly Ball Innovator Award. “This honor is presented yearly to a local official whose cycling advocacy efforts have made a broad impact in Los Angeles County. LA County Bicycle Coalition recognizes a innovative champion of bicycling who recognizes that communities that are better for people who bike are better for all community members.”

May got more students connected with more backpacks, as The Willows Community School and the CCUSD Backpacks for Kids program joined forces for a volunteer effort.  “The Willows Upper Elementary (third, fourth and fifth grade) students collected food, and on May 31 they delivered the goods as part of their community service learning project. Susan Sleeper, spokesperson for the school noted that ”Community’ is an intentional part of our name, and community service is an integral part of our educational program. The Willows’ service learning program is designed to provide age-appropriate community service opportunities that will enrich learning, teach civic responsibility, and strengthen community ties.”

June saw the 20th Anniversary of the Academy of Visual and Performing Arts. A special Hall of Fame presentation at the annual Java Gala gave awards to the founding staff and fundraisers who created the AVPA 20 years ago, starting with original board member Dan Nannini and topping off with retiring President of the AVPA Foundation, Elaine Behnken. Big cheers also went out to Janice Pober and Brian Higgins, the Fineshriber Family Foundation, and all the parents who contribute not just their funds, but their time and talents to school. 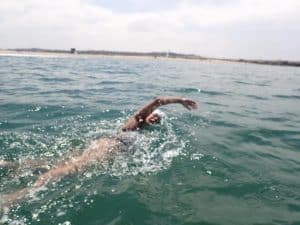 In July, Culver City’s own 20-year-old marathon swimmer Abby Bergman swam across the Catalina Channel from Catalina Island to Palos Verdes on Sunday, July 25th at midnight. Swimming across the channel is the first in a series of marathon swims that Bergman is planning on accomplishing. She is already scheduled to swim across the English Channel in the summer of 2017 (from Dover to Calais).

September saw the first ever Culver City parade, starting the Centennial celebrations on the right foot. With more than 1000 people walking, 80-plus organizations taking part, and Parade Organizer Laura Chardiet wielding a cell phone and a clipboard, the Culver City Centennial Kick-Off Parade was a gorgeous, memorable fun fest and it succeeded on every level. The ceremonial speeches that followed created a holiday that never existed before and may have to become a regular point on the calendar. September 24th may 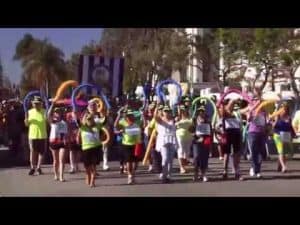 come around again, but we won’t see another one quite like September 24th, 2016.

In October, the City received a Beacon Spotlight Award for Agency Energy Savings from the Institute for Local Government. “The Beacon Award recognizes an agency’s holistic approach to addressing climate change. Culver City was recognized with a Beacon Spotlight Award for reducing its energy use by 17%. Mayor Clarke and Council Members Meghan Sahli-Wells and Thomas Small received the award on behalf of the City at the annual League of California Cities Conference.”

Also in October,  The California School Board Association gave the Culver City Unified School District the 2016 Golden Bell Award in the Community Schools through Partnerships and Collaboration category, for its exemplary and innovative program “Whole Child, Whole Community” Initiative. CCUSD Board Member Kelly Kent spearheaded application for the award, which recognizes the vision and leadership of President Steve Levin and board members Kathy Paspalis, Sue Robins, Anne Allaire and Kent for creating outstanding programs, partnerships, and governance practices to better the lives and outcomes of the students they serve. The District competed against school boards in school districts and county offices of education throughout California for the award, which reflects “the depth and breadth of education programs and governance decisions supporting these programs 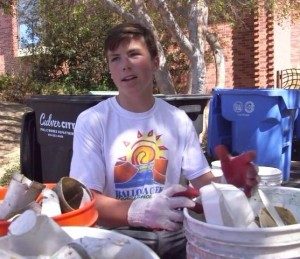 that are necessary to address students’ changing needs.”

In December, the city council voted to ban polystyrene after multiple legislation attempts, a high level of community input, and work from both Ballona Creek Renaissance and the Sustainability Subcommittee. How this is put into language and law will be seen in the coming year. Just as we looked to another city for guidence on their polystyrene ban, so we might be a role model for others in the state or the country to base their legislation on.

So, while we raise a glass to toast the coming year, we can be very pleased and proud of Culver City in 2016. It’s still a great place to live, work and create the future.