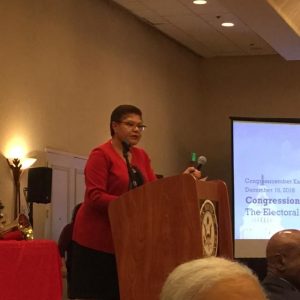 The hundreds of people who attended the year-end luncheon hosted by Congresswoman Karen Bass on Dec. 18, 2016 at the DoubleTree by Hilton had several things in common; they were connected to Bass’ work in Washington, they wanted to hear what she had to say about 2016, and they were deeply concerned about the incoming federal administration.

Many of those in the audience were constituents in the 37th District, and more than a few had worked closely with Bass on issues such as foster care and international trade. While previous years have seen Bass use this as a moment to shine a light on the her accomplishments, (and there are more than a few this year -) she left almost all mention of her work to the side to take questions from the audience.

“Tell me what you think I should do – Do we refuse to cooperate? Do we reach out and work together where we can?” Bass asked the crowd in her opening remarks. “We are Democrats, and we do not turn away from our constituents. We have seen Republicans in Congress go so far as to vote against emergency aid for the their own districts. That is not how Democrats do it.”

She did comment on the success of the election in Los Angeles,  noting the passage of Measure HHH to raise money for the homeless, and the success of criminal justice reform.

“We need to get a clear picture,” she observed, “that we did not LOSE the election. Democrats won the popular vote by a large margin. There was no phenomenon of thousands of undereducated white men who came out of the woodwork and voted. The swing states that went to Trump went largely because of low voter turnout, which we can probably attribute to voter suppression [after the Supreme Court decision overturning the Voter Rights Act.]  Romney won more white votes than Trump did.”

Noting Governor Jerry Brown’s attitude toward the incoming federal administration, she assured people that “California is in a good place. We know where our leaders stand and we know we can count on them.”

Rather than garner applause for the 16 bills she has introduced to Congress in the last year, or talk about her trip to Cuba with President Obama, she listened to voters talk about their fears of losing their heath care, their Social Security, their public school funding. Bass took it all in, and reflected with measured good sense and pragmatic focus.

“We should be looking at theses issues, and looking at who is going to make those decisions. She offered a slide show (available through this link  www.facebook.com/RepKarenBass/?hc_ref=SEARCH&fref=nf ) giving details on the proposed federal appointments and how they may impact the government.

“Now, not all of the Republicans are delighted with these choices, and we are going to look at how they work their objections. Both  Sen. John McCain (R-AZ) and  Sen. Marco Rubio (R- FL) have made their objections known in regard to the proposed Secretary of State appointee Rex Tillerson, the C.E.O. of Exxon-Mobil. These appointees have to be approved before the get the desk.”

Bass did take a moment to talk about the success of ‘Shadow Day’ when foster youth were pared with the congressional reps in their district to ‘shadow’ them for the day, following them at their jobs. “It creates a bond, and once you have an emotional connection, it’s easier to put a face on that issue rather than see it as a list of facts. Emotions can help to pass legislation more easily than analysis. It’s about being human.”