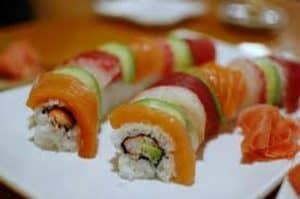 Being in Southern California makes us one of the premier spots for fantastic seafood of all kinds. I was spoiled as a child with lobster and crab but as I’ve matured, fine sushi is the tops for me. This is a major statement having been raised on steak. I was also spoiled in that as we had quirky neighbors when I was five years old who were onto this raw fish fad. We thought it was odd but wanted to give it a try, and were instantly hooked. I have memories of sitting at the sushi bar with the chef smiling at me, and making me special tuna sushi with less wasabi on each one. What a great memory. Obviously, sushi is alive and kicking, if not swimming, all over the planet. With more sushi joints on every corner, the rate of growth seems unimaginable.

This makes it hard to keep up. The other day wandering through Overland Plaza here in Culver City, where my wife and I have lived for coming up on twenty years, we found by far the greatest gem of my sushi life. Yokohama Sushi.

This was our first time at Yokohama Sushi, and we didn’t know what to expect. The restaurant was gorgeous and relaxing. It was early evening, and we were served immediately I knew exactly what I wanted to try. We ordered a large hot sake and noticed they had Toro as a special. Who doesn’t want that, and a bit rare, no pun intended. We ordered all of our favorites and two orders of Toro, not noticing it was $10 PER order (oops.)  No worries, as it was easily the best $20 I’ve ever spent in my life. I barely remember eating, it melted in my mouth so quickly.

The quality of the sushi was perfect, and the quantity was off the charts. Minor challenge –  where was too little rice, it was difficult to handle. Wow, what a problem, too much sushi.

But we just came in for a nibble before we noticed we had gorged ourselves on our favorites. The Toro, Albacore, Ahi Tuna, a delectable scallop roll, to die for. And then, like candy, yellowtail, hamachi. Look, I know you all know all these great pieces, I just wanted to convey what a wonderful experience we had piece by piece. It was that good, and that unexpected. After all this we realized oh my goodness, it was going to be quite the bill. It was just around a hundred dollars. Don’t forget, $20 was just for the Toro. The delicious and generous large sake, and all the other items. wonderful Tempura, several pieces of shrimp, And the kind that even the vegetables we’re awesome. New for me, usually it’s the filler for them. Cali rolls, spicy tuna cut rolls, in salmon, yup another one melting. The brilliant thing was how unexpected it was and how consistent it was from beginning to end;  the people were beyond delightful. We were pampered, and we deserved it. We will see them again soon. Make sure to go to Yokohama’s.