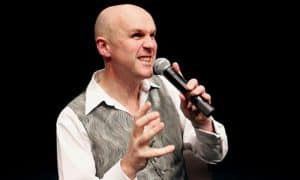 Playwright, actor and director Tim Crouch will join the cast of the American premiere of “Adler & Gibb,” a co-commission by Center Theatre Group with the Royal Court Theatre in London. Written and directed by Crouch and co-directed with Andy Smith and Karl James, the DouglasPlus presentation of “Adler & Gibb” will run January 17 to 29 at the Kirk Douglas Theatre. The opening will be on January 18.

“Adler & Gibb” tells the fictional story of Janet Adler and Margaret Gibb, legendary boundary-pushing conceptual artists working in New York late last century. When they abruptly step away from the limelight at the height of their careers, the mysterious move only adds fuel to their fame. From the real to unreal, from fake to true and from theatre to film, the play takes Crouch’s fascination with form and marries it to a compelling story of misappropriation.
The cast includes Crouch as Sam, Gina Moxley as Margaret Gibb, Jillian Pullara as Student and Cath Whitefield as Louise. The production features design by Charlotte Espiner (from the original design by Lizzie Clachan), lighting design by Natasha Chivers, original music and sound design by Max and Ben Ringham (with Helen Skiera) and video design by Christine Molloy and Joe Lawlor. The production stage manager is Brooke Baldwin.