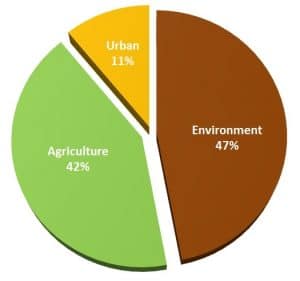 “Californians rose to the challenge during this historic drought and recognized that conservation is critical in the face of an uncertain future. This plan is about harnessing the creativity and innovation that Californians have shown during the driest years in state history and making water conservation a way of life in the years ahead,” said California Department of Water Resources Director Mark W. Cowin. “This plan will help make permanent changes to water use so California is better prepared for whatever the future brings.”

The new plan’s fundamental premise is that efficient water use helps all of California better prepare for longer and more severe droughts caused by climate change.

California recently suffered the driest four years in state history, with only average rainfall last year, and 75 percent of the state remains in severe drought conditions. Meanwhile, a new report from UCLA projects that the Sierra Nevada snowpack — one of California’s largest sources of water supply — is likely to drop 50 percent by the end of the century due to climate change. Recognizing these risks and many others, today’s plan seeks permanent changes to water use that boost efficiency and prepare for more limited water supplies. These practices will help achieve a top priority in the Governor’s Water Action Plan – to “Make Conservation a California Way of Life.”

The plan builds on the success of mandatory water restrictions during California’s severe drought and develops long-term water conservation measures that will ensure all communities have sufficient water supplies. This will involve activities such as ensuring farmers plan and prepare for severe drought and permanently banning wasteful practices like hosing off sidewalks and driveways.

“The last few years provided the wake-up call of all wake-up calls that water is precious and not to be taken for granted,” said Felicia Marcus, Chair of the State Water Resources Control Board. “Californians rose to the occasion collectively during the drought. We can build on that success and now prepare for a more unpredictable and disruptive future marked by a changing climate – and do it equitably and cost effectively.”

Today’s plan represents a shift from statewide mandates to a set of conservation standards applied based on local circumstances, including population, temperature, leaks, and types of commercial and industrial use. For example, communities in hotter and drier climate zones will receive irrigation allowances that reflect evaporation levels.

Permanent bans on wasteful practices, such as hosing driveways and excessively watering lawns.
Technical assistance and financial incentives for water suppliers to implement leak prevention, detection, and repair programs.
Collecting information about innovative water conservation and water loss detection and control technologies.
Requiring agricultural water suppliers to quantify water use in their service areas and describe measures to increase water use efficiency.
Full compliance with water use targets for urban water suppliers by 2025.
Planning and preparing for continued and future drought and water shortages.
Some of the actions described in the draft plan will require working with the Legislature on new and expanded State authority, while others can be implemented under existing authorities. All recommendations aim to achieve the main objectives of the Governor’s Executive Order B-37-16: use water more wisely, eliminate water waste, strengthen local drought resilience, and improve agricultural water use efficiency and drought planning.

In addition to taking action to implement this long-term water conservation plan, State agencies recognize the reality that most of California potentially faces a sixth year of historic drought. Therefore, in January the State Water Board will also consider whether it must extend its existing emergency water conservation regulations, as required by Governor Brown’s recent executive order. The State Water Board has already taken action to maintain mandatory reductions in communities that could not verify they have enough water supplies to withstand three more years of severe drought.

Today’s plan, Making Water Conservation a California Way of Life, Implementing Executive Order B-37-16,” is the result of extensive community and stakeholder engagement across California. The plan was prepared by the Department of Water Resources, the State Water Resources Control Board, the Public Utilities Commission, Department of Food and Agriculture and the Energy Commission. For more information on the development of the draft plan, visit http://www.water.ca.gov/wateruseefficiency/conservation/.

Comments should be submitted to [email protected] no later than December 19, 2016. Public comments will be posted at: www.water.ca.gov/wateruseefficiency/conservation/comments.cfm.