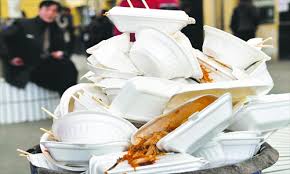 The long awaited ban on polystyrene passed the Culver City council last night after more than two hours of comments, almost 40 minutes of discussion on the dais, and a six-part vote on each aspect of the proposed  ordinance.

The meeting of December 12, 2016 saw the council chambers filled with citizens, stakeholders, and many students, all there to speak to the issue of the ban. At the most recent meeting where this item had come before the council, there was more than an hour of input from the audience. This was more than two hours of public comment, with many students and youth organizations coming to speak. Girl Scout Troops 7925 and 15365 both took to the podium to support the ban, as well as the Associated Student Body officers of CCMS and the Ballona Creek Renaissance Club of CCHS. Many of the students mentioned that the school district’s decision to change to compostable lunch trays five years ago had been prompted by many of the same reasons; the health risk of polystyrene, the garbage and litter generated, and the need to care for the environment.

Modeled on the Manhattan Beach law banning polystyrene, the council approved the decision to ban single use polystyrene food containers, and the decision to ban food service use of hard plastic single use food containers, as well as the ban on foam coolers not encased in hard plastic. Retailers will also be prohibited from selling single use polystyrene containers. Restaurants will be offered a hardship exemption, with Council member Jeff Cooper looking to set a formal standard for how that exemption be granted. “Let’s get some tax returns, let’s get some quarterly reports, some figures that offer a compelling reason to make an exemption.”

The only motion to fail was the ban of retail sales of hard plastic, with Meghan Sahli-Wells and Thomas Small as the votes in favor.

The city had just begun a pilot program in November, making a six month commitment to recycling polystyrene through Titus, a company that brokers many types of recycling. The spokesperson for the company noted that it was still a fragile experiment, and that only 80% of the cost was being covered by the current rate. Pointing out how fluid the market for recyclables is, Council member Sahli-Wells noted that neither Titus or the city could commit to the process if it couldn’t pay for itself. Shali-Wells was in favor of seeing through the six month experiment, and still solidly in favor of the ban.

Mayor Jim Clarke offered concerns over styrofoam packing such as supermarket meat and fish trays that had a point of origin that couldn’t be easily covered by the ban. Council member Göran Eriksson noted a wealth of possible recycling options that were still in development, but currently unavailable.

With such a long discussion, the depth and breadth of recycling, composting, consumption and regulation were all commented on by council members and commentators from the audience. As one of the last speakers, Jim Lamm, the president emeritus of Ballona Creek Renaissance came to the podium. “We need to do this – for the creek, and for the future.”

It now falls to the city staff to complete the language for the ordinance that will return to the council for one more formal vote.