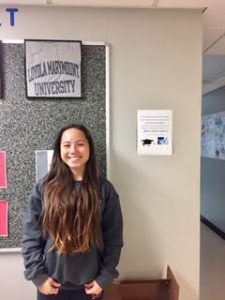 Bourne, who will be majoring in film at LMU’s top-ranked School of Film and Television, and two other seniors from City Honors College Preparatory Academy and John F. Kennedy High School, will join the LMU Freshman class of 2021 next fall.

The highly competitive Women in Entertainment Mentorship Program, which placed 18 at-risk young women with top female executives this year, is a joint venture between The Hollywood Reporter and Big Brothers Big Sisters of Greater Los Angeles. The program provides opportunities to girls who have overcome major obstacles and dealt with unemployment, immigration issues, illness and other issues.

Speaking to a room full of film executives and leaders, including Tina Fey, Ryan Murphy, Megyn Kelly, Niecy Nash, Jon Hamm, Constance Zimmer, Susan Sarandon, Issa Rae and Eva Longoria, Sherry Lansing, the first woman to head a major Hollywood studio, said, “These young women will redefine what success means on their own terms and by their own values. And I am highly confident that, like you, they will use their success to create a platform to fight for the causes they believe in and to give back.”

At the event, Lansing introduced this video youtu.be/nA9suhGysLs showcasing the program. The clip brought guests to tears as it highlighted the mentees who have overcome life obstacles under the guidance of top female entertainment executives.

The students meet with their Hollywood mentors twice a month in their office or location (sometimes on set). They also attend SAT prep classes on Saturdays. Each girl who participates in the program successfully (December through June of their senior year) receives a $10,000 scholarship to the college of their choice.

This marks the fourth year that LMU has partnered with THR’s Women in Entertainment Mentorship Program.

“LMU is committed to providing all young people, regardless of their financial circumstances, with the opportunity to earn an education. At this time, we have eight students – all recipients of the LMU/Women in Entertainment scholarships –thriving at LMU, thanks to this inspiring partnership,” said Stephen Ujlaki, dean for the LMU School of Film and Television, adding, “We are so thrilled to welcome these three young women to our university next year, and we are incredibly grateful to this year’s donors, Chuck Lorre, Don Johnson, Laura Lizer and Chris Savino for helping the next generation of women achieve their dreams.”