BCR is a Culver City-based 501(c)(3) non-profit organization dedicated to facilitating the long-term renewal of Ballona Creek and its watershed. In partnership with public agencies, non-profit organizations, schools, businesses and community members, BCR promotes environmental, artistic, recreational and educational projects while respecting the creek’s essential role in regional flood protection. BCR is so popular in the Culver City Community that a BCR High School Club was created in 2014 to assist in its many public and private clean ups each year.
The proposal to be presented on December 12 is modeled on Manhattan Beach’s 2014 Ordinance 14-0003 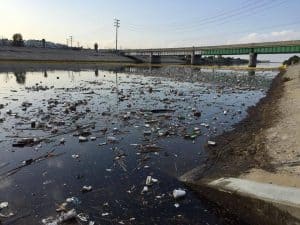 and applies to the sale, distribution, and use of single-use disposable polystyrene service ware. Examples include cups, plates, trays, bowls, and hinged or lidded containers, straws, cup lids, utensils and foam ice chests or coolers (un-encased), includes both expanded polystyrene (foam) and oriented polystyrene (rigid), and applies to off-the-shelf retail sales as well as restaurant or food service use and distribution.
Polystyrene is a particularly harmful type of plastic (#6): while it has unique attributes that make it practical and affordable, those very same attributes have irreversible impacts on the health of the community, and the environment. The wind easily blows polystyrene into the environment where it breaks apart into small particles and is mistaken for food by marine birds and fish (moving it into our food chain). Due to the physical properties of polystyrene foam, the U.S. Environmental Protection Agency (EPA) states “that such materials can have serious impacts upon human health, wildlife, and aquatic environment, and the economy.” Polystyrene contains a chemical used in the production process called “styrene” that has been linked to cancer as well as reproductive and developmental disorders by the National Research Council, and that leaches from polystyrene into food and drink, according to the Styrene Information Research Center, whose membership consists of approximately 95% of the North American styrene industry. Styrene is also a chemical known by the State of California to cause cancer, and is included as a listed chemical under the Safe Drinking Water and Toxic Enforcement Act of 1986 (Proposition 65) by the California Office of Environmental Health Hazard Assessment.
The photos below depict an all-too common site of polystyrene litter in the Ballona Creek.

Culver City High School BCR Club president Van Barth says that although efforts are being made to educate people about the problem of trash getting into the creek “litter is inevitable, and polystyrene is the worst of it, and that’s why it is important to ban it in the first place.”

BCR’s proposal describes the who, what, why, when, and how—including ways that all affected businesses can adapt to affordable alternatives and request a hardship exemption in necessary during a transition period.

Many Culver City restaurants like Samosa House, Detour, Café Laurent, Humble Potato, Jackson Market, and Tanner’s Coffee House have already made the switch, and they don’t regret it.
For the multi-city Ballona Creek watershed, BCR believes Culver City can lead the way on the critical step to remove polystyrene from our waste stream. 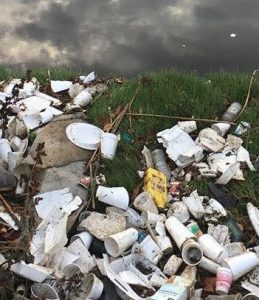 BCR previously presented their proposal to Culver City Council’s April and September 2016 Sustainability Committee meetings and at the August 8th full City Council meeting. The City Council will consider testimonies from its committee, BCR and others before providing direction to staff.
To date, ninety-nine (99) California municipalities have passed similar ordinances, and to BCR’s knowledge, no business has opted out or closed as a result. For BCR and supporting coalition firmly believe this is an effective way to reduce pollution in our precious water way and ocean, and improve the health and wellbeing of our community. Culver City is primed to become California’s 100th city to pass a polystyrene ban, just in time for the City’s 100th anniversary. This ban is a win-win-win for the environment, community, and affected businesses.

For related details and short videos on the BCR site, go to http://ballonacreek.org/towards-a-polyestrene-free-culver-city/.