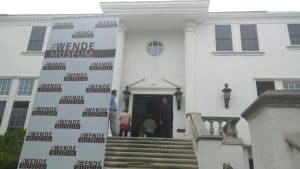 The ever clever folks at Culver City’s Wende Museum transformed a piece of SoCal capitalism into a German Democratic Republican display of the Cold War on a sunny Sunday. The colonnaded structure was open to visitors who toured the rooms, learned about the displays from docents and grazed on the generous buffet.
The 12-year-old Wende Museum, currently housed in cramped quarters on Buckingham Parkway and three additional storage facilities while building into the old Culver City Armory Building on Culver Boulevard took it’s show on the road to Beverly Hills. Using  the home’s built-in shelving, high ceilings and spacious rooms for display cases and turned the back yard overlooking two tennis courts into an outdoor café.
The event allowed ample space for the Wende’s extensive collection of unique artifacts from the era of the Berlin Wall, Balance of Terror, Russian-US saber rattling and duck-and-cover and evacuation drills in schools to practice for atom bomb attacks.
Featuring the East German flag dangling in the soaring entryway to images of leaders painted on Russia’s famous nesting dolls, the museum displayed a tiny fraction of the portraits, art, books and artifacts donated by those who lived through the era or found dumped in trash bins, left on street corners or rescued from abandonment. All have been donated to the museum since founder Justin Jampole began collecting them. He felt they were a valuable history lesson and reminder of a time when the balance of terror kept the world on the edge of destruction by atomic bombs amassed by the two super powers.
“Gorbachev, Brezhnev, Stalin, Khrushchev, Lenin and the heart of Communism,” said Director of Business Administration Alicia Ide as she named the Soviet-era leaders in order of doll size.
She is looking forward to next fall, when the museum’s new home in the former Culver City Armory 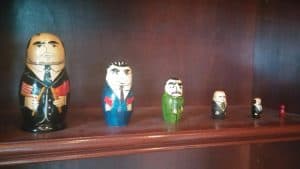 will be ready to house the collection. Work has begun and residents may notice large equipment moving in to prepare the space for its new function.
The move is a demonstration of responsible re-use, adapting an unused structure to enhance the community and create an arts venue along Culver Blvd with live music, theaters and museums.
The Wende has a continuing exhibit on Fridays, “Facing the Wall: Living with the Berlin Wall,” at the 5741 Buckingham Parkway facility, as well as an online exhibit at www.wendemuseum.org, “Living in a Socialist City: Urban Strategies in East Germany.” Both will run until December 31.