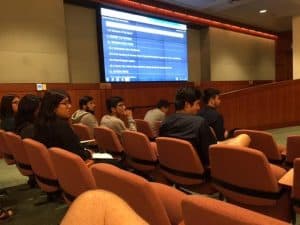 While the agenda of the CCUSD School Board on Tuesday Nov. 22 was not controversial, it was both unexpected and outrageous; unexpected in that no one could have imagined a need to address these issues before the election, and outrageous in the urgent defense of policies that have long been on the books. Even problems with the microphones did not prevent the message from coming across loud and clear; our children are safe, and we will not cooperate with hatred.

The Mike Balkman Council Chambers at City Hall were crowded but not filled, and many of those who came to address the resolution on “Campuses as Safe Zone and Resource Centers for Students and Families” were parents and students. The resolution, which had been through several drafts in just a few days, was put to public comment and a vote by the board to make it policy. It passed unanimously.

Board President Dr. Steve Levin opted to “do things a bit differently,”  and took the agenda out of order to get to the most important matters first.

Superintendent Dr. Josh Arnold offered his report by saying “I’m an English teacher, and I’ll read you a poem.” The work he read, The Abnormal is Not Courage by Jack Gilbert, gave the meeting a theme, ending with the lyric-

“Not the exception. The beauty

That is of many days. Steady and clear.

It is the normal excellence, of long accomplishment.”

Arnold closed by noting “That’s what I think tonight is about and I appreciate being a part of it.”

Moving out of the literary and back to the literal, Assistant Superintendent of Human Resources Leslie Lockhart said “We are dedicated to student achievement, and we cherish our diversity. It is the goal of this district to reflect our students, and to be able to offer services that connect with directly with needs.”

Donna Kent was the first member of the audience to speak, and she thanked the board for the draft of the resolution. 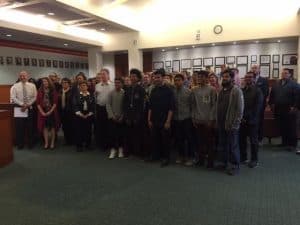 “It’s very courageous. I think the trajectory we find ourselves on is a very scary and dangerous one.” But she also felt the language was not as inclusive as it needed to be.

Levin responded “Whereas we do collect information about race and ethnicity, what we are doing is according to current practices, we are not profiling religion, race or ethnicity.”

Vice President Kathy Paspalis noted “We can have another resolution in the future.”

Marina Sanez, the president of Latino Unidos, a campus club at CCHS, thanked the school board.  “Your resolution puts our students at ease.”

Noah  Zatz, a parent in the district, gave his perspective as the child of refugees; his parents were born in Ukraine at the end of WWII, and emigrated to the US. “It’s very important to me to make this country what they thought they were coming to and not what they that they were fleeing from.” As a law professor, he also recommended changes to strengthen the language of the resolution.

Paspalis stated, “Tonight for me is already very difficult,  that we have to go through this exercise. It’s just reminding students and staff of what we already know, and how we already function. But this resolution is necessary.”

Dr Giovanni Washington, a parent in the district, approved of the updated language. “The document [as it read] on Friday made me feel invisible. What was not being addressed was the fact that these problems have existed for a long time.”

Assan Sayid, the Imam of Culver City’s King Fahad mosque and the parent of a fourth grader in the district offered both thanks and praise of the city’s reaction to the election. “With the incoming administration, our anxiety has been heightened, but it has brought out the best of the people in this city. We have had supporters line up outside the mosque, and we have been gifted with works of art, and  bouquets of flowers. We are very grateful for the outpouring of support, and for making our children feel that they are safe, and they are home.”

Lila Swenson, parent of two children in the district said “Thanks for the fight I know you will be fighting. I’m grateful to have such smart aware leaders taking this on. There being no federal requirement to comply with ICE, we know that that may not be the case much longer.”

Dr. Kim Indelicato,  the Principal at Lin Howe, gave a personal reflection. “Thanks for acknowledging our diversity. On behalf of all school site administrators, all of our lives are richer and fuller because of that.” She spoke of suffering from professional discrimination as a lesbian working in another state, and said “This is part of what brought me to California.”

Scott Kecken, the parent of a middle schooler, member of the site council and one of the parents who organized a petition to support the platform of the resolution said they had garnered 185 signatures on a petition.  “I think the resolution is a great first step.”

Paspalis spoke to the urging from many sides to calm down, and accept. “We felt the need to do this based on what we were hearing after November 8th from all quarters. It’s essential to retain one’s capacity for shock. There is nothing normal about this. While I appreciate all the gratitude,  I don’t think you need to thank someone for doing what is right. We are just doing what is right.” 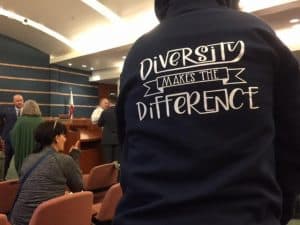 Dr. Kelly Kent took her stand. “I want to acknowledge that the urgency of this situation [and remind our staff and teachers] they are dealing with fear and they need to know that the leadership is ready to speak on their behalf. We don’t know what the end of January means for us.”

Dr. Arnold offered that the “parent group we met with last week [is a] next first step. We will be creating a task force – students, parents, teachers, administrators. What kind of ongoing partnership can we create with the city? We are doing the right thing. Passing this resolution is only the beginning.”

Dr. Kent asked the board to remember what children need to learn.  “I would love for the adults in this community to know that they can give our students the safe space to process. Taking care of emotions is not taking time away from eduction. it is giving them the time that’s needed to be able to feel. Children feeling anxious are not able to focus on learning.”

Board member Anne Allaire concurred. “We know this is only a first step into [what we may face in ] the coming months and years.”

Board member Sue Robins gave her thanks to all who wrote to the board and the staff. “This has been a very difficult time, and  it’s good to know that you want us to do this. If we have to take extra measures to be sure that they know they are safe, we want them to that they are. To our students – carry on with your learning, we will take care of you.”

Levin called for the vote, stating “This is a symbol. It’s not a change in our policy, we are already doing this. But symbols are important. Symbols show your community and your world what you stand for. I want to offer a personal story in support of this symbol. When my oldest daughter was born she acquired a special fifth grandparent. His name was Alfie Wilzig, and he had a number tattooed on his arm. He was a survivor of the death camps, and I will be casting my vote in his honor.”

There were five ayes, and long applause from the crowd.

Dr. Arnold asked for all those present to gather for a commemorative photo, and the meeting recessed with many hugs and handshakes. Many who came to support the resolution left feeling the strength of community and a sense of connection to symbols of inclusion, tolerance and civility.