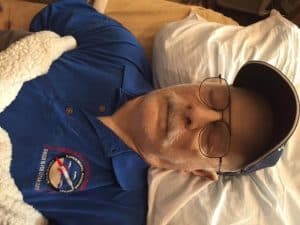 Charles “Charley” Hoult passed away early this Wednesday morning at his home in Culver City. His wife, Janet Hoult shared with us that “Some of his CSULB students were here before the mortuary came to pick up his body. We dressed him in an Experimental Sounding Rocket Association shirt with a cap from Orbital ATK. Pastor Jim Maines from Grace Lutheran Church came over to pray with us yesterday and remarked that heaven will now have a rocket expert to call on.. He looks like he’a at peace and just taking a nap before engaging his mind in an engineering problem, doesn’t he?”

Hoult was an active member of the community, and did much offer his knowledge of astronomy and rocketry to students and friends.

In 1958 Charles Hoult was initiated into the sounding rocket business as a freshly commissioned Air Force Second Lieutenant assigned to Air Force Cambridge Research Laboratory in Bedford, MA. After leaving the service in 1961 he continued his sounding rocket work at AFCRL until 1968. His AFCRL responsibilities included systems engineering for, and flight test of, new sounding rockets. His experience there covered the spectrum of sounding rockets from Nike-Cajun thru Aerolab Argo D-4. From 1968 thru 1971 he worked on the Aerobee and Astrobee sounding rocket families while employed by Space General in El Monte, CA. From 1971 thru 1973 he was employed by Space Vector Corp., Canoga Park, CA working on the Aries guided sounding rocket and various guidance and attitude control systems. As a consultant he continued to work on sounding rockets until 1977.
After 1977 he worked for The Aerospace Corp., El Segundo, CA, and TRW (later part of Northrop Grumman), Redondo Beach, CA until his retirement in 2007. During these thirty years he supported the Titan launch vehicle and various classified satellite and missile defense projects.

Starting in 2006 he returned to his first love, sounding rockets, by accepting an appointment as Mentor in the Mechanical & Aerospace Engineering Dept. at California State University Long Beach. Most recently, he has served as an Adjunct Professor in the same Department.

He was educated at MIT and UCLA. He was a member of the AIAA, the Planetary Society and the Air Force Association. His sounding rocket publications include 17 papers on mission planning, structural loads, trajectory dispersion and post burnout attitude.

HIs website, Rocket Science and Engineering Technologies offers open source software for anyone who seeks tools for amateur rocket design. You can find it at www.rsandt.com/index.html

The City Council meeting of Monday November 28, 2016 will adjourn in his honor.