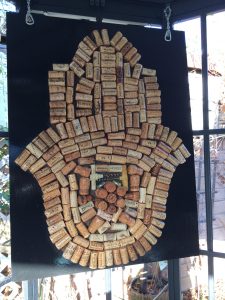 It all started in Poulsbo, Washington. Poulsbo is a little town on the Olympic peninsula right across from Seattle. The area was Native American Susquamish territory until the “Treaty of Point Elliot” of 1855 removed the people from their land and into a reservation. Scandinavians arrived here from Europe, finding a terrain similar to their homeland, and Poulsbo became considered “Little Norway.” At this point, Poulsbo is not as in-your-face Scandinavian as Solvang is Danish, it is still a charming little village surrounded by waterways. We arrived at night on the way back to Seattle from our original destination of Port Townsend. We found most of the stores closed, except for a craft store at the edge of the town.

This craft store specialized in mosaic work, and was alive with people nursing glasses of wine and sandwiches while tile-ing in a mirror, a wooden shape or a glass object. Light music playing in the background, the overwhelming sound heard was the clitter-clatter of fingers searching through glass and/or ceramic mosaic tiles. The store would close too soon to start a project at that moment, but we had enough time to take a good look around the store. Realizing that the social aspect of spending a Friday night out doing such a pleasant local community activity would be lost, we realized that the craft itself could be done in the comfort of one’s own home, given the proper materials. My friend suggested that we try to mosaic up some of the $1.99 lanterns adorning my yard that we’d bought at the 99 Cents store over the summer.

I managed to get myself to that Mecca of “proper materials:” Michael’s, the following weekend back home in L.A.. Traversing the aisles of Michael’s is an orgiastic experience for a crafter like me. I found an employee to direct me straight to the mosaic tiles, and promptly filled my cart up with a few different types of glass bits, in varying shapes, sizes and colors. Behold, my now $10 lantern – a little ungapatchka (consult your urban dictionary for this descriptive Yiddish word) to be sure; see the specimen pictured in the accompanying photo (#1).

I experienced a single-minded, intoxicated, frenetic drive to start the project, and complete it in one sitting. A commitment later in the afternoon prevented me from starting work on a second lantern with another set of tiles the same day, but I want to attempt to describe the drunken rush I felt, and my still-present desire to mosaic every surface in my backyard, having already satisfyingly completed a mosaic Hamsa (also known as “hand of Fatima”) out of wine corks (see photo #2) previously. There’s a house on 26th street in Santa Monica that has most of its outside surfaces filled with mosaic tiles; I’ve watched it evolve over the years, and I’ll soon again be back in Barcelona, that granddaddy of mosaic-laden architecture itself. So I don’t expect my enthusiasm to wane anytime soon.

As a child, I used to draw pictures, then cut pieces of construction paper into random triangles, and mosaic over the pictures with them, using lots of white Elmer’s glue that stuck on my fingers and could be peeled off into little ball-ies. I still have a few of my creations hanging in frames (Photo #3). When I was still a classroom teacher, I often had the students doing mosaics for crafts. One of my best projects was my dragons. I had students from Pre-K to 8th grade doing them during my summer programs. The kids would draw a dragon, take the better part of a week doing the mosaics while listening to music, after which exercise, they’d have enough fodder in their heads to write a nice, long dragon story. They got to pick whether the dragon would be good or evil, Asian or European, and what powers it would possess.

But enough about mosaics, my crafting Jones reared its addictive head even before Poulsbo, come to think of it. The 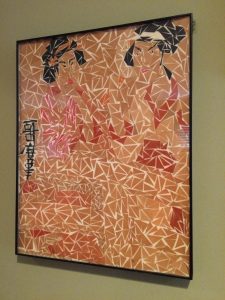 yearn started at a yarn store in Port Townsend, earlier in the day, where I not only scored a few beautifully-colored skeins, but a crochet hook made of the most deliciously brown and white, high-gloss, wood. I crocheted up a hat to wear before I left Seattle, and propelled myself back into stitch mode. Michael’s has yarn too, you see, so I came away with a few balls from which I can make beanies for both of my Bay Area based boys.

Back at Michael’s, I indulged in yet a third form of creativity, self-expression and relaxation: yes, coloring. As a child, I was never given coloring books. My dad didn’t believe in it; didn’t want us to feel hampered by coloring within lines – no wonder I am the contrarian I turned out to be! He used to give me a sheaf of computer paper generated by the big IBM machines and a 64-box of Crayola crayons, and I’d be happy for hours. As for the current coloring craze, I feel like I got into it before most people, but maybe just on the earlier side. I have certain special coloring books; they call them “adult coloring” books, and you think they’ll be risqué or something, but I guess they are just more intricate than a couple of bunny rabbits under a tree. Adults seem to go for mandalas, animals, sea life, flowers, and random designs, but my favorite is cityscapes. Duh, I love to travel, in real life, and on paper. 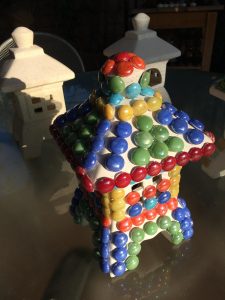 I had originally questioned spending my rare and hard-earned three day weekend in Seattle, a place I’d been so many times before – even lived, for six weeks back in 1989 -but there is a joy in doing new things in old places, and, I guarantee that any travel a person undertakes will have some inspirational value to it.

The car ferry from Seattle to the Olympic peninsula, which contains both Port Townsend and vampiric Forks, was an entirely new and unique experience. The little towns with big histories were also quaint and delightful, and just the setting for doing crafts, harder to settle down to do in hustle-bustle places like home.