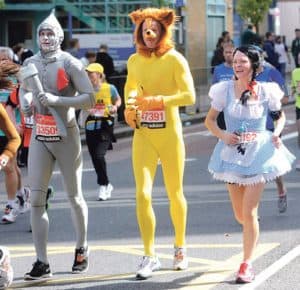 Train for the once-in-a-century Culver City Centennial Screenland 5K with a triathlete and Olympian on Sundays, 4 pm, at Culver City High School track for your Academy Awards Sunday morning journey through two movie studios and a towering rainbow.

The hour-long training sessions begin Nov. 27, 4 pm, during Thanksgiving weekend, providing a great start to work off those turkey trimmings! All ages and abilities are invited to the weekly workshops that will run right up to race day, Feb. 26, 2017.

“This is the perfect opportunity to get out and enjoy being active as a family. We will start with easy run and walk intervals building up each week to running the full 5K on race day,” said training session leader Kirsten Bell, who completed her third Ironman in Quebec’s Mont Tremblant this past summer, and ran the Senshu Marathon in sister city Kaizuka, Japan, two years ago as a representative of the Culver City Sister City Committee.
Olympic Games medalist Rod Dixon will assist several of the weekly sessions. Dixon, a two-time World Cross Country Championship medalist and winner of the New York City Marathon, brings his KiDSMARATHON program to Culver City to experience the joy of exercise and nutrition, and develop positive life-long habits.
Runners on the Ocean League champion Culver City High School cross country team also will participate in several of the Sunday, 4 p.m., walking and running activities.

Kirsten Bell’s sister, Monica, who is assistant principal at El Marino Elementary School, is among school leaders assembling fun teams for the race.

Email [email protected] to reserve your spot in the free training sessions.

Screenland 5K runners and walkers can dress as their favorite actor on Academy Awards Sunday morning as they follow Dorothy, Toto and the Munchkins pursued by the Wicked Witch of the West on the yellow brick road, experiencing legendary movie and television soundstages at Sony Pictures and Culver Studios, a soaring rainbow, and 100 scenes of lore on the Culver City Centennial Trail. Participants finish on the red carpet with Scarlett O’Hara, Rhett Butler and paparazzi in a once-in-a-century family fun 5K adventure in the Heart of Screenland.