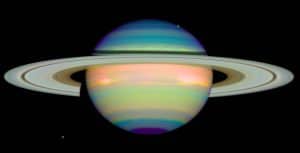 With the conclusion of the international Cassini mission orbiting Saturn and its moons set for Sept. 15, 2017, the spacecraft is poised to soon begin a thrilling two-part endgame.

Cassini will enter the first part of this denouement on Nov. 30, 2016, when the spacecraft begins a series of 20 passes just beyond the outer edge of the main rings. These weekly loops around Saturn are called the F ring orbits, and they send the spacecraft high above and below the planet’s poles. During these orbits, Cassini will approach to within 4,850 miles of the center of the narrow F ring, with its wispy and ever-changing structure.

“During the F ring orbits we expect incredible views of the rings, along with the small moons and other structures embedded in them, as we’ve never seen them before,” said Linda Spilker, Cassini project scientist at JPL. “The last time we got this close to the rings was during arrival at Saturn in 2004, and we saw only their backlit side. Now we have dozens of opportunities to examine their structure at extremely high resolution on both sides.”

Cassini’s final phase—called the Grand Finale—begins in earnest in April 2017. A close flyby of Saturn’s giant moon Titan will reshape the spacecraft’s orbit so that, instead of passing outside the rings, it passes through the gap between the rings and the planet. The spacecraft is expected to make 22 plunges through this gap—an unexplored space only about 1,500 miles wide—beginning with its first dive on April 27.

During the Grand Finale, Cassini will make the closest-ever observations of Saturn, mapping the planet’s magnetic and gravity fields with exquisite precision and returning ultra-close views of the atmosphere. Scientists also hope to gain new insights into Saturn’s interior structure, the precise length of a Saturn day, and the total mass of the rings—which may finally help settle the question of their age. The spacecraft will also directly analyze dust-sized particles in the main rings and sample the outer reaches of Saturn’s atmosphere—both first-time measurements for the mission.

The mission will come to a dramatic end on Sept. 15, 2017, after more than 13 years studying Saturn, its rings and its moons—and nearly 20 years since launch. On that day, Cassini will dive into Saturn itself, returning data about the chemical composition of the planet’s upper atmosphere until its signal is lost, after which the spacecraft is expected to burn up like a meteor.

“While it will be sad to say goodbye, Cassini’s final act is like getting a whole new mission in its own right,” said Spilker. “The scientific value of the F ring and Grand Finale orbits is so compelling that you could imagine an entire mission to Saturn designed around what we’re about to do.”